London has in recent years gained a loop railway that runs around the suburbs, but 100 years ago, a proposal was made for a much larger loop which would have dramatically changed how we see the city today.

Proposed by a Mr HJ Leaning in the Journal of the London Society, he was looking at the wider issue of what he considered to be too many trains heading into central London, and duplication of tracks.

His proposal was radical, but far-sighted, for at the time the underground lines in London were operated by competing companies, and he predicted that they would soon be a single company — as indeed happened.

However mainline railways were not so blessed, and belching out steam over the houses of the lines they passed by. So he suggested the wholesale electrification of mainline railways, and to avoid further expansion of railways in the centre of London, a mighty loop around it.

Oh, and he planned to scrap the large mainline terminus stations in the centre of London. 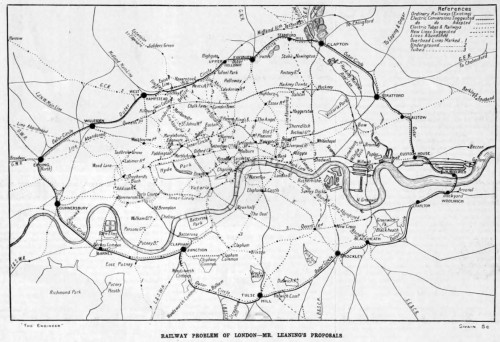 The intention was that commuters from the shires would arrive at the boundaries of Greater London, and there connect to either the “outer circle” line around the city, or onto a newly expanded London Underground.

As it happens, some of those are locations today for fairly significant junctions, so he wasn’t entirely wrong in some of his ideas.

However, the plans called not just for the demolition of the railways running above ground into London, but the construction of an entire set of new underground railways to replace them. Not in the same locations, but in effect swapping one set of rails for another.

One line would have run from Edgware Road via Victoria to Queens Road. Another line would run from Queens’s Road to Brockley and Greenwich.

A third line would have been built from Farringdon to Elephant and Castle, and then down to Queen’s Road.

A fourth underground line was expected to run from Holborn up towards Hackney.

One area where he was less foresighted was that of goods traffic, which at the time was still a significant portion of rail traffic, and he planned modifications to services to retain that traffic. That would have been a waste in the long term, but no one could have predicted how the lorry would replace the train for moving cargo.

The likely effect of such a monumental scheme would have been dramatic.

Without fast trains to the centre of London, the centre would probably gravitated away, towards the suburbs where trains were stopping. Thanks to the cluster effect, where businesses prosper more by being close to each other, we might have ended up with lawyers dominating Ealing, bankers in Stratford, shopping in Clapham Junction, government in West Hampstead.

Or maybe they would struggle, and stay were they are, causing a massive expansion of the underground to cope with the commuters no longer able to catch a larger mainline train into town.

Who knows — but what can be certain is that it would have dramatically shaken up London. Probably for the worse.

And a hundred years later we might be marking the centenary of the destruction of central London’s mainline railway stations. As it is, its the centenary of a probable narrow miss with disaster.