When you’re a museum in need of some extra space, and maybe a more visible presence in the area, what could be better than a massive and very tall glass tower on your doorstep?

Had plans gone as planned, the Museum of London would have such a tall tower, and a much easier to find front door.

In 1995, an architectural competition was run to develop a new extension for the museum which would not just give it more space, but also a more obvious entrance. The current museum site has a bit of a reputation for having a main entrance that is not entirely obvious until you are practically on top of it.

What could scream “there’s a museum here” than a massive column of steel and glass surmounted by a tall spire, sitting on top of the existing rotunda space that occupies the roundabout outside the current museum.

A landmark at last. 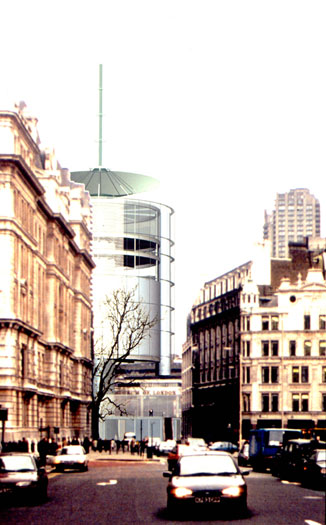 And this is what the winners of the competition proposed. Ian Ritchie Architects’ design was for what they said was a building as a display case — a suspended vertical cylinder above a new main entrance foyer.

The new entrance would have finally given the museum an easy to find way to get into the building, and also tied the two slightly separate sites, the new tower and the old building together.

The tall tower would have contained new exhibition spaces, and the roof, a garden space which would have been open to the public to give views across the city.

The roof garden would have also looked over a World City Gallery, which would have shown off London’s financial history. 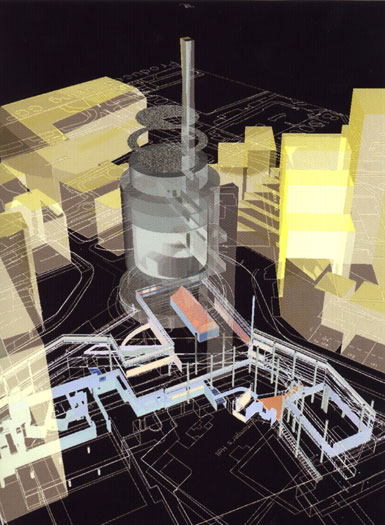 The whole project was estimated at £20 million, and an application was made for £12.5 million from the Heritage Lottery Fund, with the expectation that the new glass tower would tower over this part of the city by late 2000.

Alas, funding foundered when both the National Lottery Charities Board and Millennium commission reviewed their support and decided that they needed to focus spending away from the capital city for a while.

Twenty years later, the museum is solving its lack of space and “hunt the entrance” problems, by moving to an entirely new site, a short walk away in Farringdon.

The old museum site is earmarked for likely redevelopment, as a concert hall. Presumably with an easier to find entrance.