Just over 200 years ago, a plan was presented to Parliament that could have seen a large section of the City between London Bridge and the Tower of London turned into a series of large docks.

The scheme, by the architect and Clerk of the Works to the City of London, George Dance the younger, was in response to a call from Parliament for plans to improve the docks within London.

The docks were to be called the Legal Quays, as that’s the term given to the ports that were authorised by government to land goods from overseas, for tax and customs to be levied.

At the time, a number of small legal quays existed in the City of London, but by 1800 there was capacity for 545 ships, but the Thames was often clogged with over 1,700 ships needing to use the ports.

Hence, the City of London needed a new much larger dock that would bring not just much needed capacity, but also by consolidating the smaller docks into a single site, cut costs.

Three reports were produced by the government to look into the matter.

The second report, published in 1799, the year in which the Select Committee upon the improvement of the Port of London was appointed under the chairmanship of Sir William Young followed a petition from the City for the much needed improvement of the London docks.

In the back of the report was this plan. 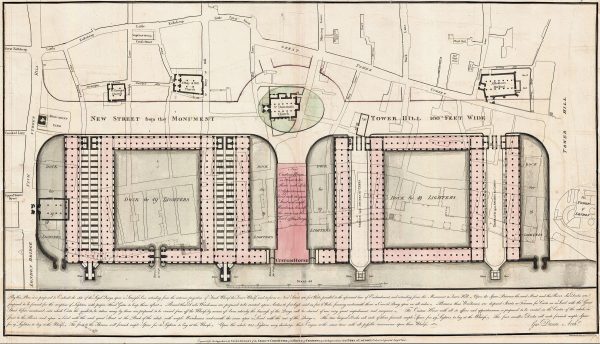 The report also includes a note from George Dance that the construction of the quays should take around five years, with the two docks being built one after the other so as to provide much needed capacity as soon as possible,

What makes it particularly interesting is how it shows Old London with the new version laid out on top, so we can see just how many buildings and roads would have been sacrificed to create the docks.

See also the prominence given to St Dunstan’s Church, now somewhat marooned on an island in the middle of a major new road scheme. Today St Dunstan is a little park on a side street, the church having been destroyed in WW2, and the park, a hidden delight that people find as “their secret” when first working there, only to realise everyone in the area also knows about it when they return for a hoped for quiet lunch on a sunny day.

To our modern eyes, it also comes shockingly close to the Tower of London,

It also looks like the New Street would have run around The Monument, and who knows if they had plans to get rid of that annoying encumbrance to their road.

The main concern of the government Committee was the cost of the scheme, and the additional road congestion in an already busy area.

In the end, a number of “public sufferance wharves” were already being established, and eventually, the Committee approved plans to construct much larger docks in the empty lands to the east of London — on the Isle of DOgs. The great docks of East London were about to appear.

Had George Dance’s scheme been approved, it would have been a marvel of the age, for about a decade, before being superceded by the much larger East London docks, and eventually, this marvel would have been a mere footnote in the history of London’s docks.