Is it a plane? Is it a train? No, it’s Railplace! Racing above the streets of London carrying passengers from city centre to airports, to Brighton, to Glasgow, all at unbelievable speeds. 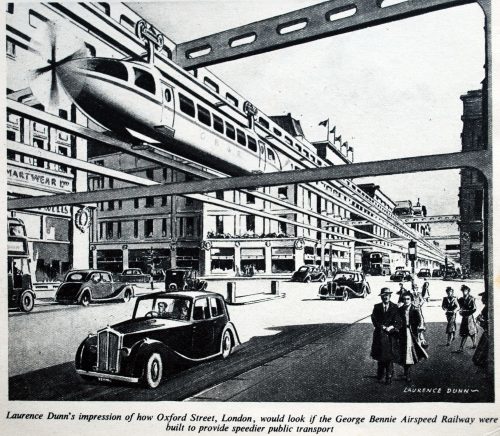 But of course, none of this happened.

Even though it worked and a prototype was built, George Bennie’s experimental Railplane was an idea that never got off the ground, metaphorically.

And although developed in Scotland, several plans were drawn up for a railway service in London, which would have taken passengers from the city centre out to London’s Airport, down to Brighton, even to Paris. An intercity line was also proposed from London to Glasgow with journeys taking just 3.5 hours – that’s nearly 2 hours quicker than it takes today.

In an echo of what is happening today with HS2, it was also proposed that the Railplane would augment existing railway services, offering high-speed intercity facilities and releasing capacity on overcrowded existing services. And being a monorail, it would have run above the existing railway, so less need to buy up more land.

George Bennie was born near Glasgow in 1892 to a wealthy family, and in 1923 was granted a patent on the concept of the Railplane. He then sunk £150,000 (£5 million today) in developing the idea but was never able to commercialise it. Sadly, he died in 1957, penniless in an Epsom nursing home.

Superficially it is similar to the Wuppertal monorail in Germany, but rather than conventional electric engines, he fitted propellers on the front and rear of the carriages.

It was the addition of the aircraft propellers that was to give it its name — the Railplane.

Although other people worked on similar ideas, only the Bennie Railplane was ever built, and on 8th July 1930, a test track was opened on the outskirts of Glasgow to show off the working monorail.

Although nominatively tied to an aircraft, most of the media of the time likened it to airships, specifically, the Zeppelins. And certainly its design did look similar to airships, and this was purely for aerodynamic reasons.

Attempts were made to promote the Railplane to cities in the North of England, but to no avail, and between 1926 and 1929, Bennie repeatedly sought permission to build tracks over Southern Railway’s service running between London and Brighton.

In October 1931, Bennie said that he had raised enough money to fund a 20 mile railway from Holborn down to Croydon Airport. Yet again, he was rebuffed by Southern Railway, who were worried about the loss of revenue from their existing service to Croydon.

However, as the Railplane was starting to get government interest, Southern offered a line running from London Bridge to Dartford via Lewisham. However, this was rebuffed by Bennie who really wanted the line to go to the airport.

This was to seal the fate of the Railplane. 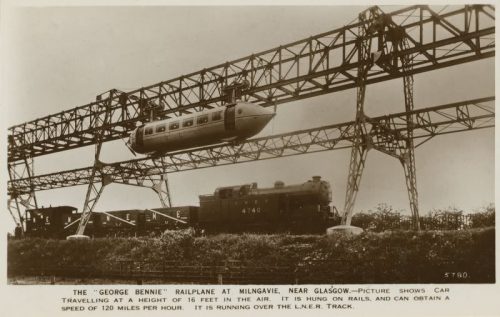 There was almost one last chance though, as another investor, Henry Boot was proposing to build two new towns, at Waltham Abbey and Dagenham, both linked to central London by the Railplane. Sadly, this did not get off the ground.

And in 1935, the company set up by Bennie to promote the Railplane suggested a cross-channel link to Paris, although with a ship carrying traffic across the water.

With a clearly ambivalent Southern Railway and few alternatives appearing to support the scheme, in 1936, the company Bennie set up to promote the railway ousted him from the firm.

Both Bennie, and the company he once ran kept on attempting to promote the technology, and in the late 1940s, he again suggested a Railplane to link the centre of London to its airport, which had in the subsequent years moved to Heathrow.

A number of other plans were announced around the world, and just as quickly as they appeared, they vanished.

However, in 1947, an engineer who had worked on the original plan, Hugh Fraser came up with a larger carriage design, but scrapped the monorail component. Running also on elevated tracks, it would have run on rubber wheels above roads, not railways. 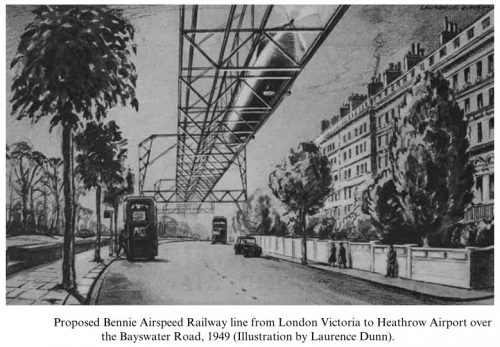 Although various schemes were proposed around the world, the one for London would have run between Victoria and Heathrow, but evidently, nothing came of any of them. Rather oddly, a later attempt in 1959, which lead to a test track being built in France, but for a service linking London to Heathrow restored the monorail aspect of the design.

That scheme failed, because the French government refused to underwrite further development, so it was the French who ruined the London monorail! 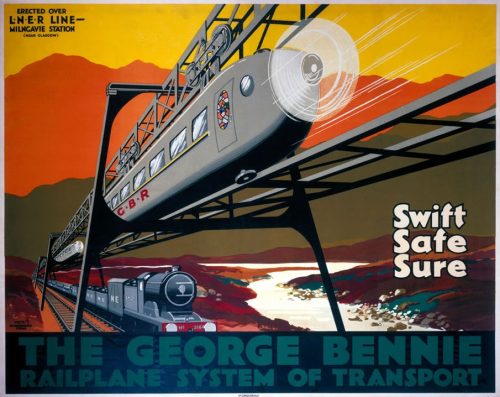 There seemed to be no technical problem with the Railplane, and indeed Southern Railway’s concerns were mostly about the potential loss of revenue it would suffer from having a high-speed competitor running over its existing lines.

In other words, they thought the Railplane might be just a bit too good.

It might have been wiser for Bennie to seek to build an entirely new line, but his entire idea was to increase the capacity of the existing railways, and also to keep his land purchase costs down.

He was therefore dependent on building good relations with the railways, and in that he seems to have been a singular failure.

With the collapse of the scheme, who knows, the entire history of London’s airports could be very different, with Croydon still the main London airport, with passengers being rushed to London Bridge on a magnificent monorail.

The Bennie Railplane, by William Black