There should be a major train junction under Oxford Circus acting as the centre point of a large double-loop tube line, had plans shown off in 1988 gone ahead. 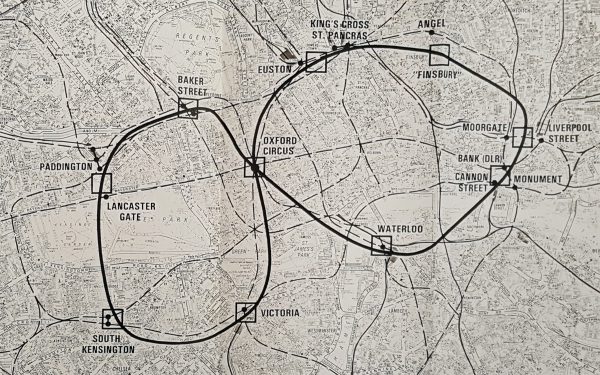 The £2.3 billion figure-of-eight tube line would have largely doubled the capacity of much of the existing Circle line and also the Waterloo & City line, but with the pinch in the centre doubling up parts of the Victoria and Bakerloo lines to create a nexus underneath Oxford Circus.

It was however just one proposal in a number of a schemes that were investigated as part of the Central London Rail Study Group report, which also considered issues such as splitting the Northern line into two, extending the Central line, the Crossrail proposals, and extending the Jubilee line to somewhere via docklands.

The report was indirectly a consequence of the Kings Cross fire in 1987 which highlighted the safety risks from many things, but also from overcrowding. The government committed to a major investment, but first commissioned a report to find out the best way of increasing capacity in central London.

The figure-of-eight railway was the proposal that dominated the news of the report being commissioned, which probably irked the railway people who were far more interested in building anything other than a figure of eight railway in central London.

Indeed, it’s a bit of a mystery as to how it was even included in the first place.

Although the report’s remit was to look at how to increase capacity in the centre of London, and that the figure-of-eight line seemed to do just that, the proposal was flawed in that it mainly increased capacity along existing tube lines rather than adding extra connections or bypasses.

At the time Oxford Circus was regularly being closed due to overcrowding, and the Jubilee line had bypassed it for that same reason, so the last thing they wanted was yet another set of tube lines there.

The figure-of-eight railway gets just a few lines in the final report, so utterly dismissed was it from the plans. The main advantage of the line, which was provisionally costed at £2.3 billion, was that the fairly few stations planned would make journeys between several major hubs very quick. Fewer stations also holds down the costs quite substantially, which was important as this was also one of the more expensive proposals in the report.

The main problem was that the figure-of-eight line didn’t address radial lines into central London, which is where the worst congestion appeared. It also added a problem, in that loop railways are always a bit of a pain to run, so much so that the Circle line was converted from a loop a few years ago to fix those issues.

Realistically, the only additional benefit the line offered was a station in the Clerkenwell area of central London, which is still today curiously badly served by tube lines. If you were minded to want to campaign for a new tube station, one on the Met line around the Mount Pleasant redevelopment would probably be quite a good place to start.

And it’ll cost a lot less than the £2.3 billion the figure-of-eight line was proposing to spend.

This article was inspired by the mapping exhibition held by TfL last year.