Unbuilt London: The fake Venice next to Tower Bridge

Rather than full of glassy offices and a testicle, the south bank of the Thames by Tower Bridge should be a neo-Venetian folly.

What is today known as More London, but back in the 1980s as London Bridge City Phase 2, was a derelict plot of land being eyed for redevelopment.

In the wake of the recent comments by one Prince Charles, options for a modernist rebuilding of the area was ruled out, in favour of a design by John Simpson and Partners, which would have been a mini Venice, by the Thames, without the canals.

A cluster of small office blocks, with a clock tower (campanile) sitting next to Tower Bridge and looking, frankly, utterly ludicrous. 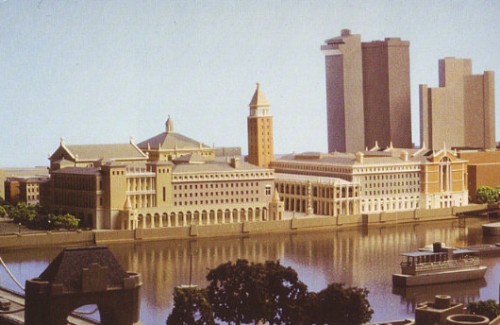 The Chinese and Americans (in Las Vegas) specialise in building fake versions of foreign cities, but who would have thought that here in London, there was a serious plan to build a fake bit of Italy in such a prime site?

More astonishingly, this was deemed to be the best of three outlandish designs that were submitted for the site.

The other two included an office block, by Twigg Brown similar to the early blocks that went up in Docklands, which personally, I am rather fond of, with stone cladding and molded details they are a far cry from the glass and steel that has since come to dominate the area. 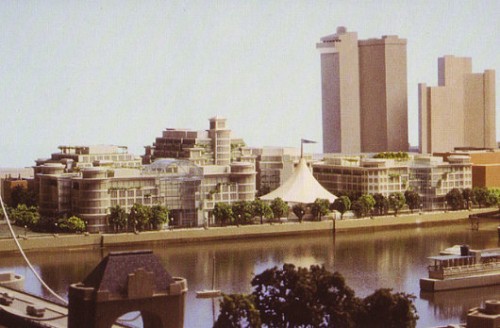 However, there was an even more crazy scheme, which was for a mock Palace of Westminster, designed by John Burgee and Philip Johnson. At the time, they said that the style would “reflect the character of nearby Tower Bridge”, although most felt it overshadowed the bridge itself. Even after amendments, the plans were rejected by the London Docklands Development Corporation. 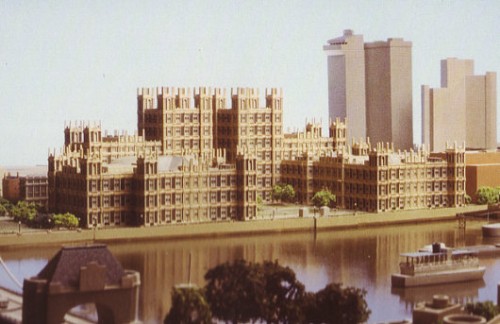 The replacement Venetian scheme secured planning permission, but the developers then took the plans and wanted to build a set of ordinary offices and simply clad them with the Italian design. The architect promptly withdrew from the project in disgust.

Fortunately, a recession put paid to all the plans, facades and all.

A team of new developers brought in Lord Foster, who came up, sadly, with a bland set of offices, and a Testicle on Thames.

Maybe Venice on Thames wasn’t such a bad idea after all.

London Docklands: Urban Design in an Age of Deregulation By Brian C. Edwards

A bridge too far for London