Imagine a railway, working without steam, running on tall columns along the banks of the Thames — for that was a scheme created to link Blackfriars with Charing Cross in the 1840s. 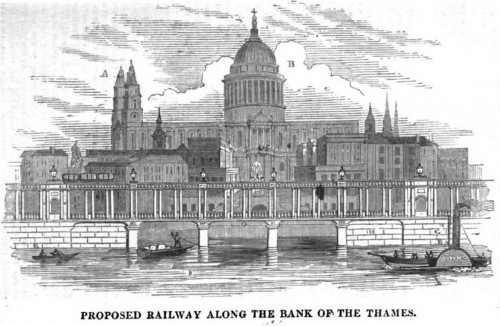 Just a few years after London Bridge station opened, it was felt that there needed to be an improved communication from the City to Westminster, and Sir Frederick Trench MP came up with an audacious scheme.

A long length stone columns would be erected along the north bank of the Thames, to create a grand colonnade some 30 feet wide for genteel people to promenade along.

Above those columns, a wooden railway would be lain, but unlike the locomotives coming into London Bridge, this would not be a steam railway. 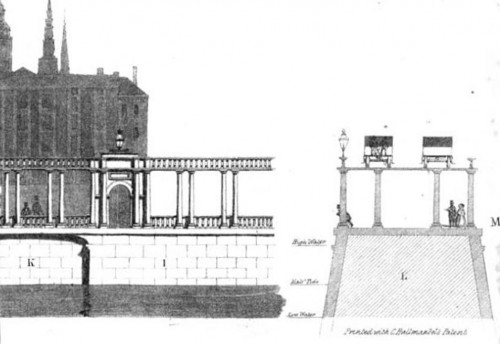 The idea was dual-fold, for the proposer, Sir Frederick Trench MP was rather obsessed with rebuilding the river frontage along the Thames, and he felt the colonnade would beautify London.

In a speech to Parliament, Sir Fred called for the re-appointment of the Select Committee which had previously considered plans for the Thames Embankment to study his plans for a communication between Blackfriars Bridge and Hungerford Market, with revenues from the railway covering the construction costs.

He estimated, rather generously, that the railway could charge 6p per trip, and with four carriages going each way, each carrying 48 passengers, that profits of more than £1 million would be generated over a 25 year period. A considerable sum of money at the time.

He also suggested that the profits could be doubled, if the railway were extended from Blackfriars to meet with London Bridge.

As noted above, this was not a steam railway though — it was to be rope hauled.

Giant winding machines at either end of the railway would pull the ropes along, and the carriages would be attached to these. The idea was not new, as it was in use in mines, but it would have been the largest such use of a rope pulled railway.

In hindsight it would have failed, as a similar idea was used for the Blackwall railway which had just opened, but was scrapped a decade later as it was too unreliable compared to conventional steam locomotives.

He also proposed another idea just introduced at the Blackwall, the use of the modern idea of the electric telegraph to control signaling on the railway, which was more reliable and faster than conventional systems.

When the proposal was made in the House of Commons, the finances were roundly rebuffed by the Chancellor, and Sir Fred was sent back to think again. He chose not to, and dropped the whole idea.

However, others continued to plan for a grand embankment along the Thames, but it wasn’t until the Great Stink, that Parliament finally acted, and an Embankment was constructed, also with a railway but underground, but mainly because a sewer was needed.

Thanks to an accident of history, the Circle and District lines now run in dark tunnels above a sewer, rather than being elevated above an imperial Embankment, offering glorious views of the Thames. 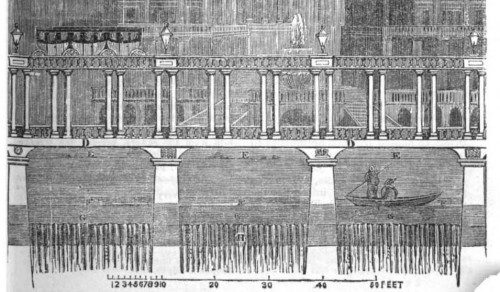