Long before the Isle of Dogs was filled with tower blocks, it was seen as a cheap plot of derelict land, and ideal for sticking a major road bypass through.

Two were proposed, one of which sort of was built, and the other, which quite evidently, was not.

The northern bypass does exist, in modified forms, as a major road, the Aspen Way, running from Canning Town to Limehouse.

But the topic of this piece is the southern relief road, which was not designed to relieve traffic in the Isle of Dogs at all, but to offer a bypass around Greenwich – this was the Docklands Southern Relief Road (DSRR). 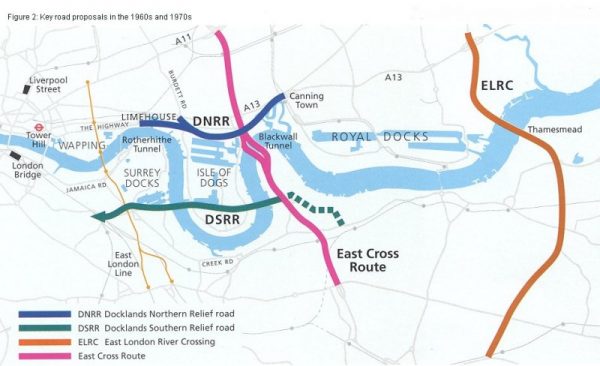 As anyone who has ever visited the area in the rush hour will appreciate, the main road running along the southern side of the Thames between the Blackwall and Rotherhithe Tunnels is rather busy. And this is in part thanks to a massive bottleneck called Greenwich town centre.

A narrow set of streets hemmed in by historic buildings, through which the traffic volumes normally found on a major road is squeezed through a tiny gap.

Therefore, in 1978, a bypass was proposed, which would have diverted traffic through two tunnels under the Thames and away from Greenwich.

Proposed by the Greater London Council, the 5.5 mile road was projected to cost £130 million, and apart from the Greenwich bypass, was hoped to spur the regeneration of the docklands area.

At the time of the proposal, the GLC warned that it might scrap the plans if they faced too much opposition. In fact, unlike other major road building plans, which did face vociferous protests, it seems to have been met by docklands residents more with apathy than anger.

“There is little hope of repopulating the area and attracting jobs and prosperity if industry and commerce are denied a satisfactory road network to get their goods in and out.” GLC Planning Committee leader Alan Greengross

Although there seemed to be limited opposition on the Isle of Dogs, Southwark Council was strongly opposed, as they were concerned about the impact on the Rotherhithe side of building such a major road.

In August 1979, the newly elected Conservative government promised to be sympathetic to the proposals if the GLC wanted to pursue them.

Although it was was still being included in the GLC plans, by the end of the following year, it seems to have ceased to be a project. Possibly because the cost had jumped to an estimated £240 million. Although there was expectation of a public hearing to push ahead in 1981, all the formal records for it stop at the end of 1980.

It seems that the road faded away with barely a murmur, but it’s failure lead to an unexpected success elsewhere.

Even if it had been built, it wouldn’t have opened until 1990, and in the early 1980s, the LDDC was looking at how to improve local transport options. A proposal for express bus routes was dependent on the road tunnel, which wasn’t going to be built, so they went for something else.

Out of the ashes of a failed road tunnel, the Docklands Light Railway was born.

They Work for You