Published 6 May 2017 by By Ian Mansfield Unbuilt London

Forget garden bridges and wobbly bridges and tower bridges, what we really need in London is a 7-story high crystal bridge!

At least, that’s what was proposed in 1963 by the  Glass Age Development Committee, an organisation set up by the glass makers, Pilkington to promote the use of glass in architecture.

Although mainly a promo outlet for Pilkington, the group did come up with some quite independent ideas, and one of many was the Crystal Span, a 300 metre long glass clad bridge to replace the existing road bridge at Vauxhall. 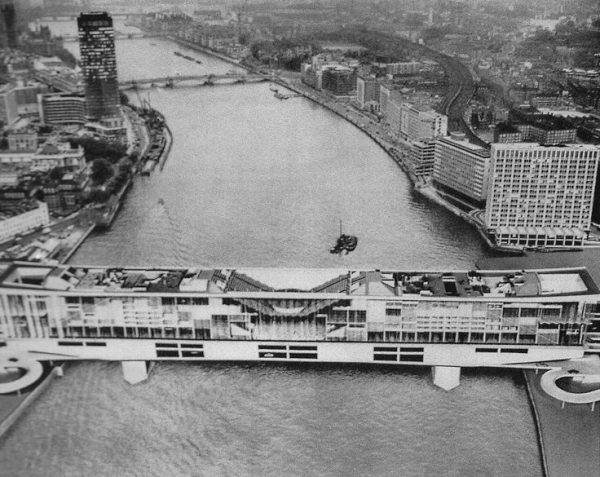 The plans called for it to be a full seven stories in height, with the lower floor being given over to road vehicles and parking for 300 vehicles.

The upper floors would have been for humans, and in a reflection of Old London Bridge, would have been lined with space for 52 shops and a travolator to make it easier for pedestrians to get from one side of the river to the other.

Apparently in memory of the frost fairs, an ice rink was included.

Add in a 120 bed hotel, an offshoot of the Tate Gallery, a 500 seat theatre, and get ready for it — a roof garden — and you have a massive structure spanning the Thames. The entire bridge would have been 300 metres long  and 39 metres wide.

Eric de Mare in Bridges of Britain described it as “a clumsy affair without gaiety but interesting as a development of the ancient housed bridges such as Old London Bridge.”

As with most of the ideas from the Committee which were to provoke thinking, the bridge was not intended to be a serious proposition for construction, but they commissioned Ove Arup to handle the engineering side of their design anyway.

Structurally, the bridge would have been made of a pair of double-decked concrete boxes for the road sections, that in turn supported the buildings above. A glass curtain surrounding the bridge and enclosing the pedestrian spaces would have hung from the sides of the bridge structure.

Sadly, the end result would probably have looked like just a very long glass “office block” floating across the Thames, built more to cram as much in to a space than for any genuine architectural merit.

It seems that the bridge caused a bit of a stir and some support, but in the end, the London County Council declined to pick up the estimated £7 million (£132 million in 2017) construction costs, and the scheme was abandoned.

Architecture and Design For the Family in Britain, 1900-1970 by David Jeremiah

The Architectural Review: In Praise of Advertising