In the 1960s, King’s Cross almost became more famous for a massive glass tower than it was for its nocturnal delights in the seedy bars. 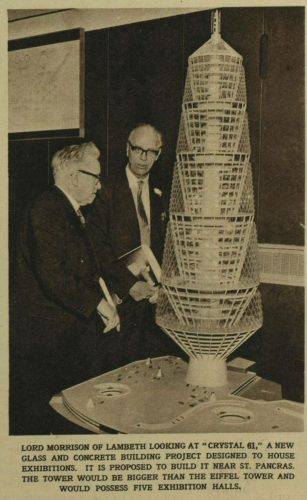 Proposed by a group of architects known as the Glass Age Development Committee, and funded by Pillington Glass, the Crystal 61 would have stood as high as The Shard is today, at around 1,000 feet.

Initially shown at then 1961 CIAM Conference in London, this was itself also a conference centre, with five vast halls stacked on top of each other. In that sense, it marked a radical development as conference centres have traditionally been groundscraper designs, swallowing up vast amounts of land and therefore tended to be on the edges of cities.

Here was a plan to put the conference world into the heart of the city, close to railway transport and hotels for visitors, yet offering more floor space than Olympia was able to offer on land less than a 3rd occupied by the Olympia halls.

In addition to conferences, the £10 million tower would have also included lecture theatres and restaurants. In a move that wasn’t to be fully realised until The Gherkin, they also designed the building to bulge outwards so that the middle was wider than the ground floor – releasing more space for landscaping.

Entry for most visitors was however expected to be via the London Underground with subterranean entrances. But as this was also the age of the motor car, it would have included a totally unsustainable underground car park for 4,500 visitors.

The structure was to be made from a central hollow concrete column, 130 feet in diameter at the ground, shrinking to 30 feet wide at the top. The foundations, based on an inverted cone (as also used at the Post Office Tower) would have gone 160 feet down, to the chalk beds.

The journal of the Rubber & Technical Press supported the proposal as an example of British engineering but unsurprisingly bemoaned the lack of plastic in the design.

Less flattering comments were, however, being raised about the massive shadow such a tall and wide building would cast over the King’s Cross area.

By 1968, it was being reported by Display magazine that despite the need for conference space, this particular project had “gone the way of the Crystal Palace project — into the filing cabinet”. 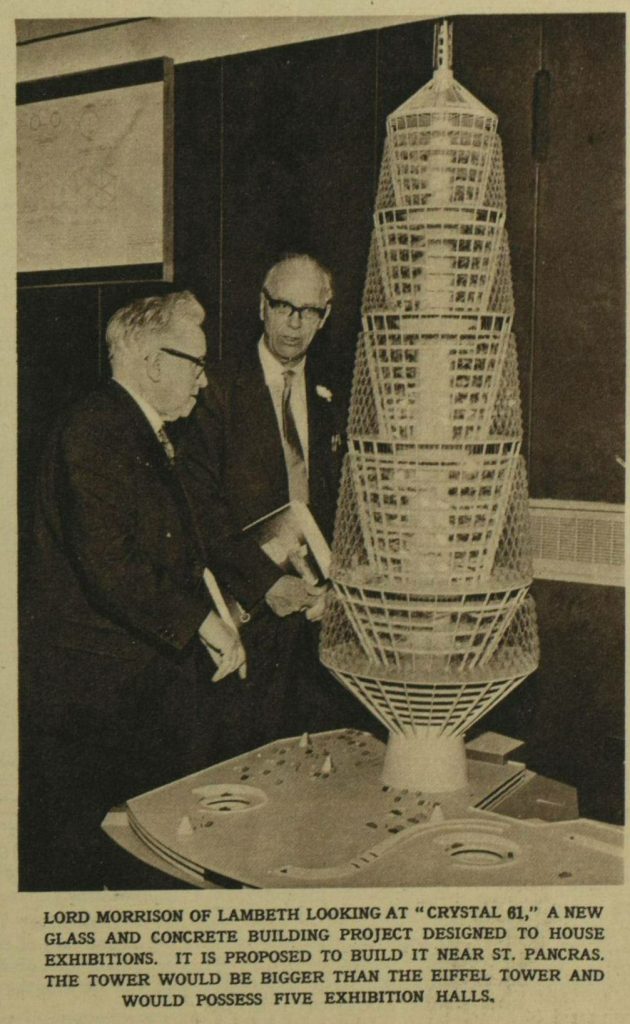 Architecture and Design For the Family in Britain, 1900-1970, by David Jeremiah

The Rubber and Plastics Age, Volume 42