In 1832, Parliament passed the Great Reform Act, and London’s skyline was nearly as radically reformed, with a 1,000 feet tall gold plated column to commemorate the occasion.

The reform of the electoral system saw the scrapping of the Rotten Boroughs and more equitably shared the seats in Parliament based on the population per MP. A wide ranging bill, it scrapped the situation where some MPs could be elected by just a handful of rural voters, while denying tens of thousands of urban residents the same right to choose their representative.

So significant was this reform, that it was not just known to be Great, but some felt needed more than a simple document to commemorate it. The Great bill needed a Great monument.

And it was a Cornishman, Richard Trevithick, who came up with a scheme, for a 1,000 foot tall column to be built in London. 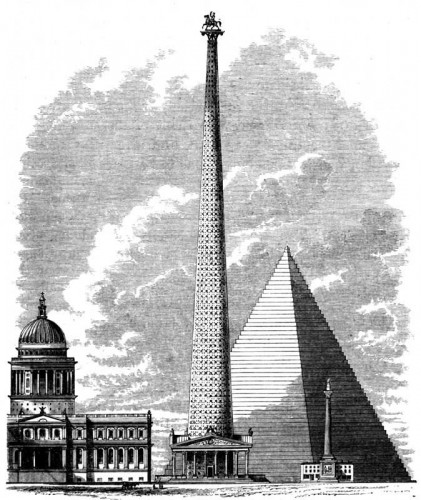 A noted engineer and steam pioneer, he certainly had the connections and skills to build such a monumental tower, although in reality the material chosen would never have survived the construction process.

But he wasn’t to know that, so Trevithick pressed on with his design. He actually started work before the bill was passed into law, so confident was he that the swell of public anger against the corrupt Parliament would force MPs to vote for change.

Trevithick’s Reform Column was intended to be a gold gilded conical cast iron tower, 305 metres high and 30.5m in diameter at its base. By comparison, The Shard skyscraper is only ever so slightly taller, at 309 metres.

It would have been constructed from 1,500 pieces of cast iron some 10 feet square, and each piece would have had 6 foot wide circles in them to both reduce the weight and wind resistance as the tower rose.

The circles would have also added considerably to the aesthetic appeal of the tower.

It wasn’t an inert column though, as there would have been a hydraulic lift which would have carried 25 Georgian Londoners high up into the sky to admire the views.

There were also plans for an ornamental building at the base, presumably as a waiting room for the lift, and topping off the column, as if 1,000 feet of cast iron wasn’t enough — a 40 foot tall equestrian statue.

As the Morning Herald of July 11th 1832 wrote, it would be a stupendous column, and “symbolical of the beauty, strength, and unaffected grandeur of the British Constitution”.

Trevithick sent a copy of his design to William IV and received an acknowledgement from St James’s Palace on 1st March 1833. Sadly, Richard Trevithick died the following month.

Although support for the monument also died, they were very briefly resurrected nearly 30 years later, as one of the proposals for a monument to Queen Victoria’s recently deceased Prince Albert.

Later, other engineers came up with towers that were planned and never built, all targeting the magical 1,000 feet mark. For the Philadelphia Exhibition in 1876, or the stone tower in Paris by Sebillot to house a power plant to generate electricity.

It wasn’t until 1889 that such a tall tower was eventually built, in Paris, by a Gustave Eiffel, using steel.

London was to make one more attempt, but that’s for another blog post.

An Illustrated Life of Richard Trevithick, 1771-1833 by James Hodge.

Life of Richard Trevithick: With an Account of His Inventions, By Francis Trevithick.

Journal of the Society of Architectural Historians, Dec 1957.