The River Thames is a rather curvy beast, especially around the Isle of Dogs, but had a plan in 1796 been carried out, it would be considerably straighter.

The big problem that was to be solved was that sailing ships were constrained by the wind conditions, and moved comparatively slowly, so navigating around the loop of the Isle of Dogs took some considerable time.

So why not get rid of it altogether?

Although largely lost to time, an Alex Forrow, of the East India Dock Company, gave a speech in 1876 about these plans, and a book of the lecture was published the following year, which drew on the history of trade on the river, and various schemes to improve cargo handling, such as a canal running through Poplar, or expansion of the Limehouse Cut.

Of the various schemes discussed, it’s the one proposed by Mr Willey Reveley which drew the most attention, as it was bold and audacious, and intended to do away with the Isle of Dogs entirely as a barrier to trade.

Not only would the plans have seen the River Thames straightened, but as the proposal was as much about speed as increasing cargo handling facilities, the intention was that the loop around the Isle of Dogs would become one massive dock, with gates at the two top ends of the loop.

So vast was the dock that it would have had capacity for 434 acres of space. 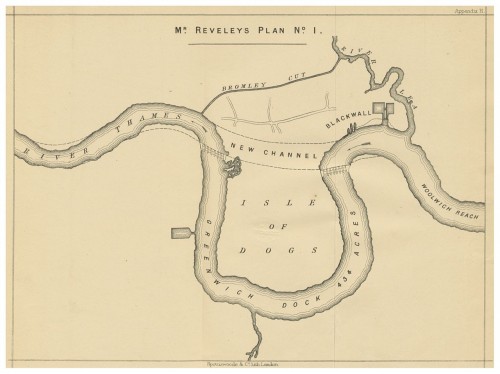 Plan two would have seen the new channel dug through both the Isle of Dogs and North Greenwich, ruining plans for a millennium dome, but creating two vast docks — the southern loop and the new Blackwall Dock. 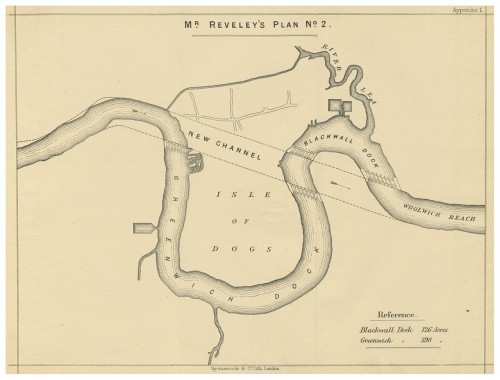 Plan three went even further, cutting out another swathe of the Thames to also add in the Ratcliff dock. 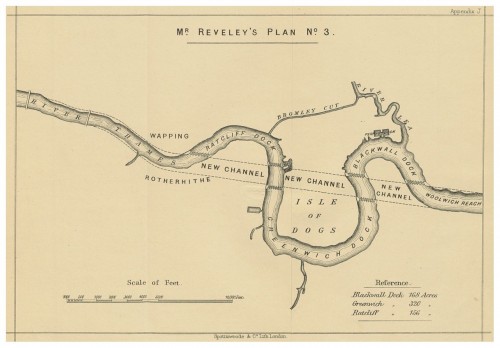 And finally, plan four would have seen the Isle of Dogs left largely alone, with two separate channels dug to create two vast docks on either side. 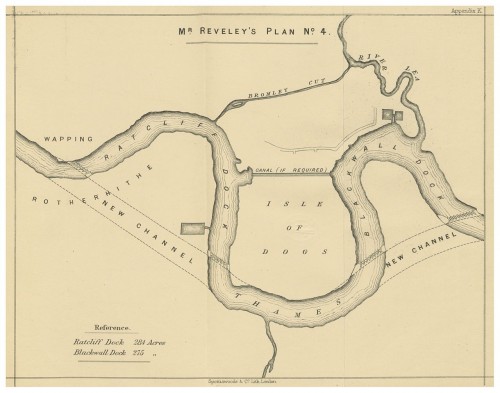 (Incidentally, that tiny little dock on the Rotherhithe side was the Howland Great Wet Dock, London’s oldest purpose built docks)

The scheme was obviously not carried out, as much due to the scale of the project and thanks to opposition from vested interests in the West India merchants, and the City of London, both of whom wanted to preserve their existing trade hubs.

Eventually, a canal was cut along the top of the Isle of Dogs, which was to become the start of the great docks and wharfs of that area.

But the grand scheme which would today probably see the loop around the Isle of Dogs as a permanent lagoon, or maybe even filled in, was nearly lost to history.

Loops in rivers tend to become more extreme over time as the river erodes its path to the sea, and eventually, the tops of the loop join to form a new straight river path, and the old loop becomes an isolated oxbow lake.

We humans arrived just a few thousand years too early!

There were other plans to deal with the annoying encumbrance that the Thames posed to London, but those are for another day.

The Thames and its Docks. A Lecture, by Alex Forrow 1877