200 years ago, a plan was announced to plonk a giant pyramid in the centre of London, for no purpose other than to cock a snoot at the French.

While that is itself a worthy endevour, this was to be achieved at the cost — to the taxpayer — of around £1 million. Which at the time was around 1 percent of total government spending, or about £7.4 billion today.

Which is a bit excessive, even for annoying the French.

The idea for the pyramid came from Sir Frederick William Trench, an MP and soldier who wanted to commemorate the defeat of the French at the Battle of Trafalgar which had taken place just 10 years earlier.

At the time, Admiral Nelson wasn’t yet the folk-hero that he is today, so any proposal to commemorate the battle was less the man than the war. At the time, proposals for a Nelson’s column would have been seen as a very odd thing indeed.

So, in 1815, Trench began what was to become a rather trenchant campaign that basically seemed to annoy everyone for a giant pyramid to celebrate the great battle against the French.

However, the monument wasn’t to commemorate the Battle of Trafalgar, but the war entire, and specifically, the Battle of the Nile, which the MP saw as the real turning point in Napoleon’s imperial ambitions.

And that was the reason for a pyramid.

According to a letter from the architects to Lord Anglesey, the pyramid would have been taller than St Paul’s Cathedral, and had a base of around 360 feet along each side. 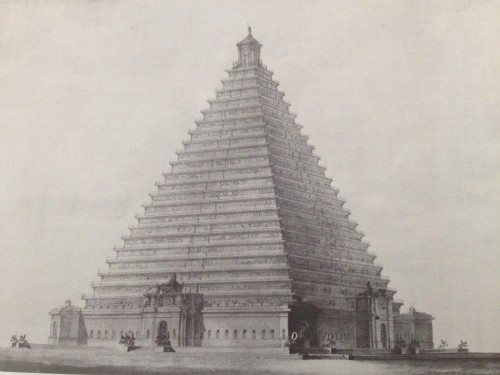 They expected construction to take maybe 5 years, and the cost per year would have been “not burthensome to the nation”. A measure of cost-cutting, or employment creation, they expected that lots of men discharged from the military now that the war was over could be employed in the monument’s construction.

Each of the 22 steps would have marked one year of the wars.

A model of the monument was supplied by the architects, Philip and Matthew Cotes Wyatt, which went on display in the Pall Mall residence of the Duke of York. Despite support from the drunken duke, the proposal got no further than the model, and a few drawings.

It’s not entirely sure where the monument was planned to go, although Trench had suggested that land occupied by the King’s Mews at the top end of Whitehall might be suitable.

As it happens, that land was cleared in the 1820s/30s, and became today’s Trafalgar Square. So, today where people dodge pigeons and climb on lions, we might be walking around a giant pyramid, which would have had a floor-plan nearly four-times the size of Trafalgar Square.