Compared to the great monuments of ancient lands, there are few if any buildings in London which can withstand the ravages of the millennia, and it’s time to build a mighty monument so that future generations can remember the grandeur that is the capital of a mighty empire.

Thus alarmed that a future apocalypse might cause people to forget mighty London and its works, David Walsh wrote a warning to The Strand Magazine in 1903.

War was coming, and with ever more powerful munitions, and maybe even flying machines, who knew what the world might look like in a hundred years time and people struggle to survive on a blasted land, and having little time to keep records of the past alive.

The recently completed Albert Memorial, grand as it is was already showing signs of decay, but look at the so-called Cleopatra’s Needle, thousands of years old and still hale.

Likewise, the mighty pyramids of ancient Egypt recalling the power and glory of that land when all else is forgotten.

But, what evidence would be forthcoming, say, in eight thousand years’ time, for some future Flinders Petrie digging among the buried cities of the British Islands?

So, Mr Walsh, a Doctor, wrote of a monumental scheme for a Great  National Monument. A vast structure of that kind could be raised, say, in Hyde Park, of such a size that it would be visible from the greater part of London. 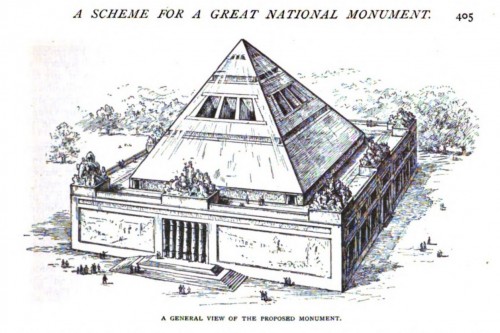 Although not solid throughout, it would still retain enough of its pyramidal shape to ensure stability of structure, and thus become the enduring legacy of mankind’s folly.

Outside, the building would be divided into two portions, the first a pyramid and the second a square base. About two-thirds up the pyramidal part windows are cut for the purpose of lighting a large interior chamber. In order to lessen weight the apex — that is to say, the part over the windows — is hollowed out into a large chamber, which might, perhaps, be useful as an observatory.

The pyramid wouldn’t have run down sheer to the ground, as say for an Egyptian design, but stands on a square pediment or base, reaching, say, to a third of the total height from apex to ground-level. Supposing the total height to be one hundred and fifty feet, then the pediment would be thirty-seven feet high, a sufficiently imposing size for all practical purposes.

Along with looking imposing, it was proposed that the pyramid become a burial-place for our great dead.

The suggestion coming from Mr Walsh’s impressions that there was a “pressing need of a new Valhalla, for the available burying space in Westminster Abbey is already of the scantiest.” 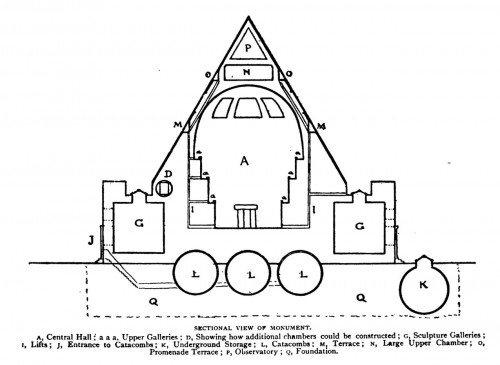 He also felt that the cost of such a building would have to be defrayed mainly by public subscription, although the Government might be asked to contribute to the site and to guarantee a substantial sum both to the foundation and to maintenance.

As the monument would be Imperial as well as national in character, an appeal might be made to the Colonies, although quite why far Canada or Australia would want to pay for a pile of stones in London is beyond understanding.

He finished noting that what was possible in ancient Egypt should surely not be altogether impossible in modern Britain.

Well, quite evidently, it was impossible in Britain, as the plan was generally scorned as frankly, not quite English and not fitting with the emerging notions of a more equal society. 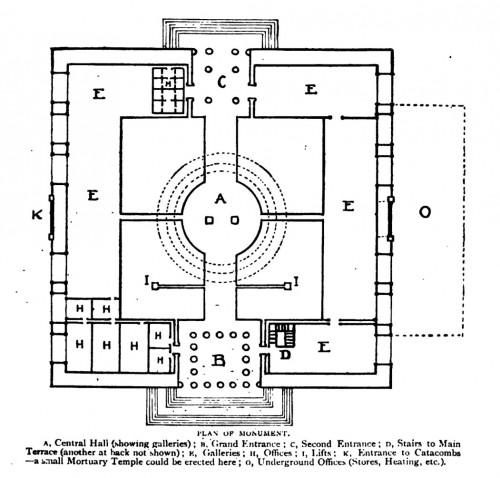 I met a traveller from an antique land;
Who said: “Two vast and trunkless legs of stone;
Stand in the desert. Near them, on the sand,
Half sunk, a shattered visage lies, whose frown,
And wrinkled lip, and sneer of cold command,
Tell that its sculptor well those passions read;
Which yet survive, stamped on these lifeless things,
The hand that mocked them and the heart that fed:
And on the pedestal these words appear:
‘My name is Ozymandias, king of kings:
Look on my works, ye Mighty, and despair!’
Nothing beside remains. Round the decay;
Of that colossal wreck, boundless and bare;
The lone and level sands stretch far away.