Unbuilt London: A Bronze Slab Next to Parliament

In the early 1970s, plans were announced to demolish a cluster of old buildings opposite Big Ben* and replace them with a vast monolith covered in bronzed glass. 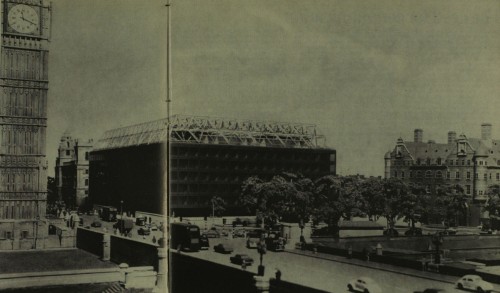 The need for the building then was the same as for the current building which was eventually built, to offer more space for MPs in Parliament.

An architectural competition, organised by RIBA was held in 1972, and of the 246 entries submitted, one by Robin Spence and Robin Webster was the winning design, earning the two architects a handsome £8,000.

The design would have cost £7 million to build (in 1972 prices) and was described as a squat construction clad in bronze and glass and a — radical for its time – computer designed roof lattice. 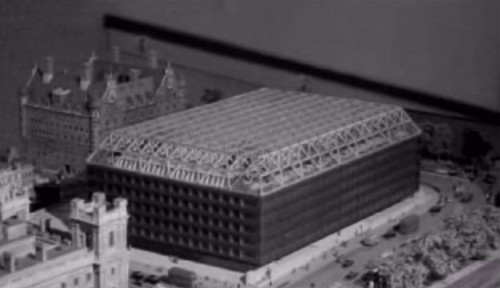 The building would have been suspended from the roof structure, and supported by four concealed service towers which would have straddled the District and Circle lines, while the main office floors were raised up above a covered square in the centre of the building.

Plans to open up the ground floor area to the public were swiftly dropped and a bomb-proof glass wall added to the design. However, the top would have been a “secret room”, with a roof garden and views across London.

When shown off to the public, nearly 14,000 people visited an exhibition of the designs, although it was noted at the time, that fewer than half of the MPs visited the exhibition — which was after all about a new office for their convenience.

The GLC started expressing doubts about the design and various amendments were made to assuage their rising concerns. However, by the following May, even MPs were starting to get cold feet about the design.

Later it was alleged that the government misrepresented the design to MPs in an effort to get more on side for a plan to quietly ditch it. Despite that, in June 1973, MPs approved plans to to build the new bronzed slab next to the river.

However, although the architects carried on developing the scheme, construction never started, and an economic downturn made starting it even harder.

Eventually, in July 1975, the plans were dropped as costs soared from the original £7 million to £30 million (excluding the cost of the land), and MPs were told to look elsewhere for cheaper offices.

With its cladding of bronzed glass, it would have looked exceptionally dated within the decade. Today, with bronzed glass utterly decried as rightly awful, and the building unfit for modern use, it would have probably been demolished when the Jubilee Line came burrowing through the area.

And rather than a squat tired looking 1970s office block, we’d probably still have the current Portcullis House.

Or maybe one of the runners up: 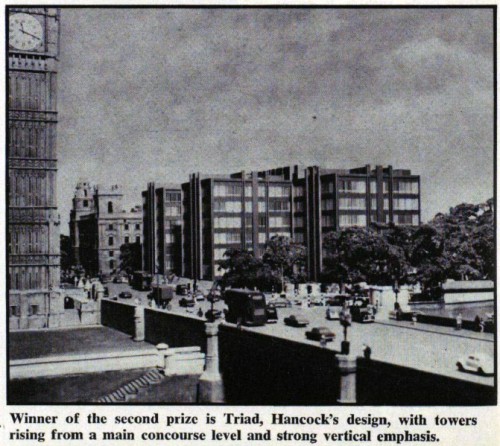 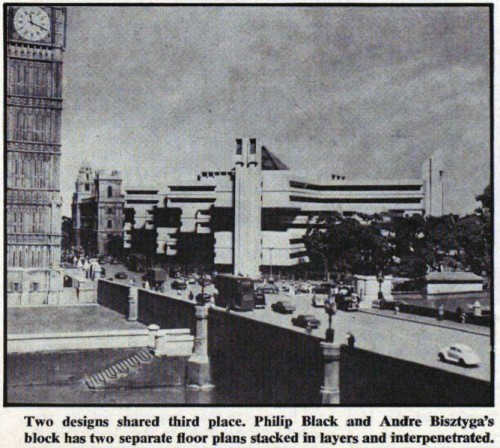 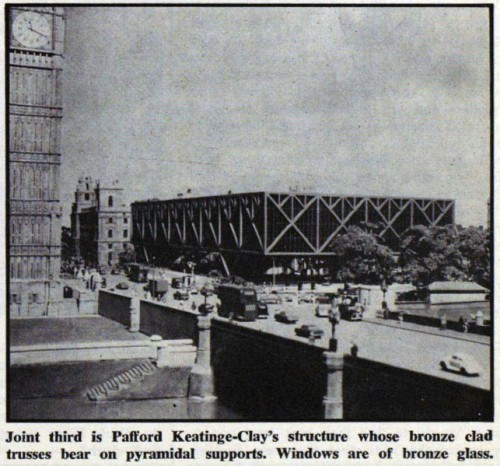