In 1938, as ideas were being made for the defence of London, plans were shown off to surround London with a massive “aerial mine-field” made from over a thousand deadly balloons.

In a lecture given at the Royal United Services Institution, the man in charge of London’s balloon barrage outlined his plans which had been previously hinted at but were still fairly secret. Air-Commodore J G Hearson described the scheme noting how it differed markedly from WW1 balloon barrages.

Towards the end of the Great War, as aerial bombardment of cities from Zeppelins became a reality, balloon aprons were deployed around cities.

The apron was a network of cross wire and hanging wires suspended from four or five balloons. However, it was so heavy that it could not be sent up very high, and the balloons bunched together from its weight.

Against modern aeroplanes, it would have been useless.

The barrage proposed was not an “apron” of wires strung between the balloons, but a simple design where the balloon simply holds a wire upright in the sky.

As the Air-Commodore noted, if these balloons were placed at 100-yard intervals, with bombers having average wing-spans of 70 feet, then there was a one-in-four chance that a plane passing through the mine-field will hit one of the wires – and hence, a 50% chance of being destroyed if the plane gets over London and tries to leave.

As media reports of the time noted, a 50% chance of destruction would be too high a level of loss for any military to sustain.

The secret was how the cables would be able to destroy the planes, as a 3mm wide cable would be annoying to a large plane, but not lethal. On that, the Air-Commodore retained a degree of military silence.

While details are scarce, it is known that the balloon, while filled with explosive hydrogen was not the weapon. Something special was to be done to the wire itself.

“On this point I must content myself with assuring you that this problem of making the cable lethal against modern aircraft has been found capable of solution.” Air-Commodore Hearson.

At the lecture, Hearson admitted that at present the balloons could not get up to 25,000ft commonly used by aircraft of the time, but he said that it took considerable effort for a bomber to take a useful load of bombs up to that level above the city. A barrage of only 10,000ft in height would help the defence of London a great deal.

He did note that if planes chose to avoid the balloon mine-field by flying higher, then they would be less able to drop bombs accurately, and would be reaching an altitude where London’s pollution was thinner so it would be easier for fighter planes to spot the bombers and deal with them.

In addition, aircraft coming in low over London are at less risk of being shot down by anti-aircraft guns as by the time they are spotted and targeted, they have probably passed over the gunners heads. High up, there is more time to aim the guns and fire.

Air Commodore Hearson concluded with the words: “A balloon barrage, as part of the air defences of London, is almost an accomplished fact. It is not a political stunt and it is not merely a ‘scare-crow.’ It will be a very real and considerable contribution to the air defences, meeting a requirement which cannot be met by any other means known at present.”

Just 1,100 balloons would have been needed to create a barrier some 20 miles around London reaching 2 miles up into the sky.

Although the balloon barrage plans were well received, a counter proposal emerged which was not for a wide perimeter barrage, but to scatter the balloons more widely across the city.

It was felt that the reality of the military defence capabilities of the barrage would in-fact be less than the propaganda value of such a defence, and a barrage around the edge of London would be less visible to Londoners than a scattering of balloons across the entire city. 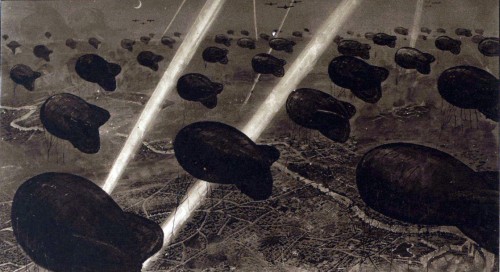 So, for propaganda reasons alone, the aerial mine-field was not built around London, but right on top of it, leading to some of the more iconic images from the Second World War. 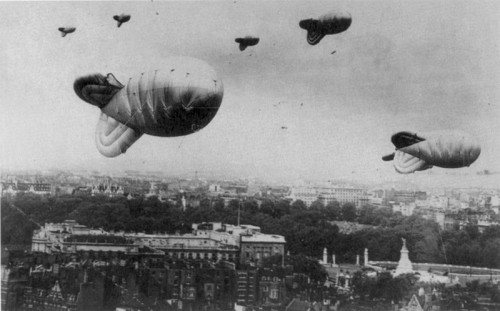