Unbuilt London: A 500 Foot Tall Monument to the Battle of Britain

A massive pyramid, topped with a pillar, and then some more — not the Post Office Tower*, but a monument to the Battle of Britain. 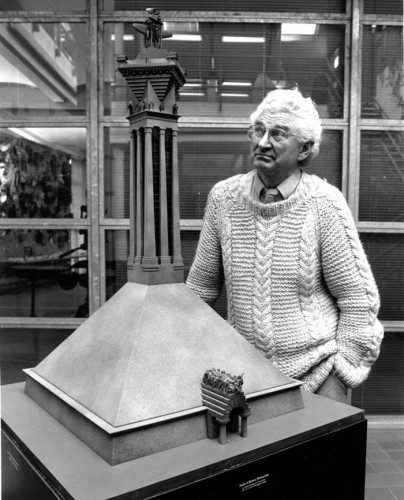 Proposed fairly recently, in 1988 by a noted architect, Theo Crosby, it would have stood near Surrey Docks, and at some 500 feet tall, dominated the area.

In fact, it wasn’t an inert monument, but education centre, and tourist attraction, with lifts which would have taken people to the top for views across the city.

Crosby’s scheme would have cost around £30 million, and comprised of a hollow granite clad pyramid, which was to be filled with moving images and apparently, even holograms.

People would enter the pyramid via a vast entrance lined with Doric columns, and around the base, presumably to give the expected queues something to look at — a 20 foot high freeze detailing the history of WW2.

The idea was that these ghostly apparitions would “come whisperingly to life on arrival and die away as the visitor leaves”.

The visitor would in this case be leaving be elevator, which would have taken them to the summit of the monument for the views. 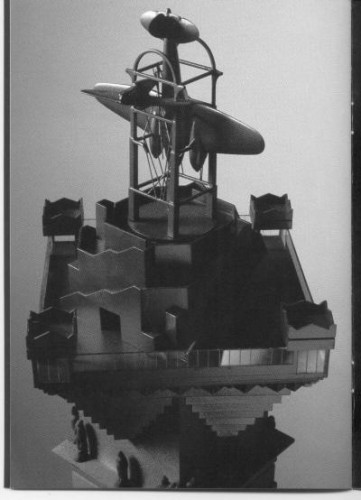 If the plan sounded a bit crazy already, then the summit should convince you. It was to be surmounted by 6-metre high statues of the aviators who fought in the Battle of Britain, and a giant sculpture of a Heinkel bomber crashing alongside a Spitfire plane.

Although the plans had support from the Chairman of the LDDC, unsurprisingly, the monument, and particularly its glorifying summit caused a bit of a scandal, with the Association of Battle of Britain Pilots dismissing it as totally unsuitable.

Crosby’s vision never came to pass, but one of his greatest achievements was built, and unlike the memorial, is a much loved part of London. He was the architect who designed the Globe Theatre at Bankside.

The Battle of Britain itself did eventually get a memorial, a more modest affair on the edge of Green Park.

A Journey Through Ruins: The Last Days of London, by Patrick Wrigh

*The engineering of the Post Office Tower is a square foundation, upon which stands a pyramid, then on top of that, the main pillar.

More from the Unbuilt London series

NEWSLETTER
Tagged with: battle of britain