Next week, the BBC’s Coast TV programme will have a segment about the flood barriers that were installed on the London Underground at the start of WW2. 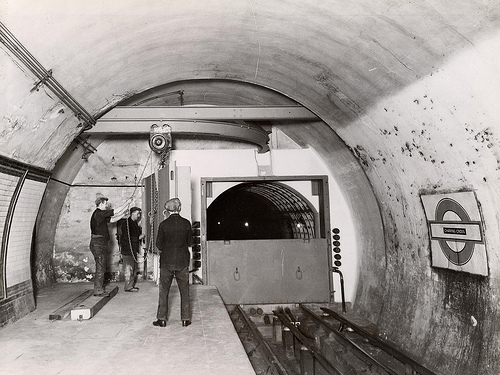 Although slightly fanciful computer graphics show the gates closing somewhat faster than they could have, the barriers are still down there, albeit disused, and they get up close and personal with some of them.

The barriers were often closed at the onset of an air-raid as a precuation, and on one occasion, that precaution was necessary, for the programme talks about how part of the Northern Line was hit and flooded.

You can read about that in more detail here.

The programme will also talk about the hydrophones that were lain in the Thames during the war to capture details of exploding bombs, and also the occasional gun shots fired into the water to test that they were still working!

The episode, Sea and the City will be shown next Tuesday on BBC2 at 8:30pm.