Broadcast on BBC2, the “Fifteen Billion Pound Railway” starts next Wednesday, 16th July at 9pm and follows the construction of the new train tunnels and Elizabeth line stations under London.

Crossrail provided access over a two year period to the film crews to make the film. Based on the reaction to the BBC2 series about the tube network, this should be a hugely popular TV series. 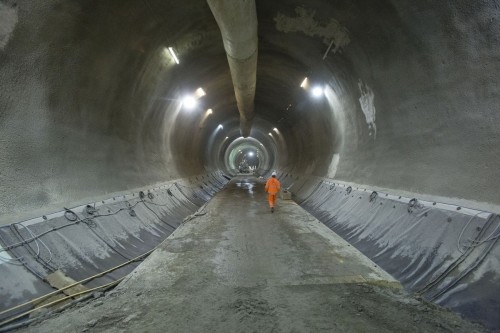 The first episode, Urban Heart Surgery, follows the team of workers as they drive 1,000-tonne tunnel boring machine, Ada, through Tottenham Court Road station within 800mm of the operating Northern line. It also looks at how Crossrail has ensured Bonhams auction house in Mayfair is able to receive its vintage cars for auction.

Episode two, Tunnels Under the Thames, sees the Bermingham father and son team follow in the tradition of tunneling greats, the Brunels, and build new train tunnels under the River Thames in southeast London. Meanwhile, Project Manager Linda Miller is rebuilding the Victorian Canary Wharf. The cameras join engineers as they carve out the underground caverns that will become the new stations at Liverpool Street and Whitechapel. And, it follows archaeologists as they uncover a 14th Century emergency burial ground, established ahead of the plague.