60 years ago, the Festival of Britain opened, largely at the South Bank in London, but it was actually a nationwide festival with events all across the country.

However, London was the focus, and the city was barely recovering from the damage of the war, but also expected a vast number of visitors to the Festival on the South Bank.

So where could the visitors stay while in the city?

They turned the deep-level shelters built during the war into cheap hotels. The Ministry of Education published school guidance booklets which advised how to get the children down to London, and they would be offered the chance to either sleep in the deep level shelter, or in tents on Clapham Common.

It wasn’t considered ideal, and in May 1950, the then President of the Board of Trade wrote in a memo about the lack of hotel accommodation in London for the festival:

The War Office has hitherto permitted the use of the Clapham deep shelter by students and others requiring cheap accommodation. It is unfortunate that a shelter has to be used for this purpose, but without it considerable numbers would not find a bed in London.

It seems that both the shelters at Clapham South and Goodge Street were used in this way, and also included canteen facilities as shown below: 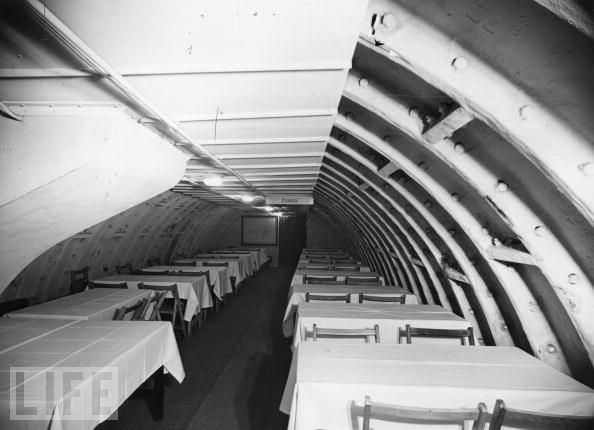 2nd December 1950: The canteen at Clapham Deep Shelter to be used to accommodate visitors to the Festival of Britain. The shelter can take 4000 people, is served by limited lift facilities, with electric light and ventilation.

Clapham South shelter was also used by the War Office as troop billets in June 1946, as a billet for troops lining the route for the funeral of George V1 in 1952 and for Coronation visitors in 1953.

Since then, they are either abandoned, or used for document storage.

The story that the tunnels were to be used after the war for an expansion of the Northern Line is a bit of a myth. Even during war, the expenditure on the tunnels had to be justified, so it was suggested that they could be used for such a purpose, but London Transport was always opposed to the idea – however it was put in the paperwork to justify the initial construction costs.

Visiting these tunnels is one of the “Holy Grails” for anyone with an interest in subteranean London, although sadly most are used as document storage. Letting random tourists wander round is not going to help the company maintain its image of a VERY secure storage facility.

Which is an understandable pity, especially as the few photos I have seen of them suggest that they are largely untouched from their WW2 décor and would make phenomenal tourist attractions if just one could be cleared out and opened up.

I doubt we’d get away with using them as hotels today – although I know a fair number of people would be delighted at the chance to spend the night in a 1950s “hotel”, your correspondent included.

They Work for You

Google Books – The Autobiography of a Nation