Bus routes with all their stops are usually far too long to be displayed as a long sticky back strip above the seats, so the new displays will be smaller and show a short upcoming segment of the route.

And it looks just like a tube map in concept. 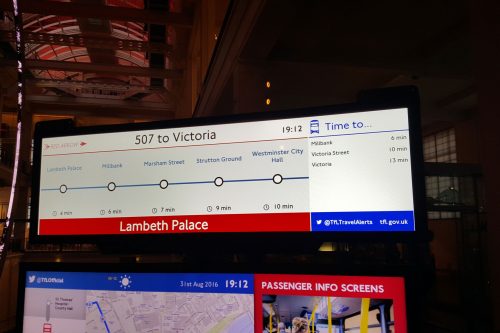 Design aside though, the new displays are part of the ongoing work at TfL to find interesting ways of using information and presenting it back to passengers.

Some of these ideas were on show at the Science Museum at their latest late night event. The bums on seats trial seems to be going well, and what has been worked on is conveying information about the buses location to both people waiting at stops, and those on the bus itself.

The use of a digital screen means that the information can be more dynamic, which is good in theory, but only if there is reliable information to be dynamic with, and that’s one of the major innovations of this new display screen.

As anyone who chats on a mobile phone will attest, wireless signals are not entirely reliable, so a lot of work has gone into designing the system to be able to gracefully downgrade if the wireless or gps signals are lost.

When you have the full package, the route map shows where the bus is, what’s upcoming, and if there are known transport problems ahead, such as tube delays, they are shown as well. As the signals are lost, some of the data is cached locally, or falls back to more basic displays until the signal is recovered.

The system will also show local street maps if the bus diverts away from its usual route due to road problems, and that should help people plan where to get off when in unfamiliar surroundings.

Overall, the aim is to give people on busses more time to rethink their journey if there is a problem up ahead — and in turn help staff at said disrupted location by diverting away some of the potential passengers.

At the moment, two all-electric bus routes are planned for the trials, with 51 buses running along routes 507 and 521. 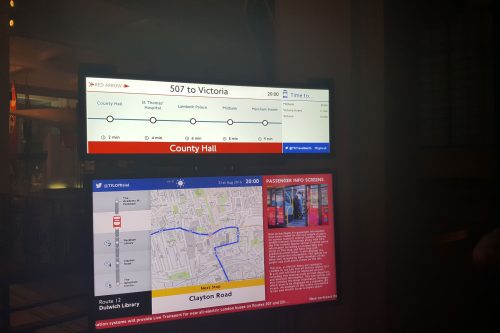 A lot of work is also being thought about how bus stops can provide more information to waiting passengers.

It’s still very speculative, but they are wondering if using the bums on seats trial could feed information to bus stops to let people know how crowded the bus coming around the corner is. More usefully, showing how empty the bus behind the next one might be, so people who prioritise comfort over speed might wait a few minutes and catch a bus with empty seats.

The waiting passenger gets what they want, a seat, and the bus operator evens out the passenger load a bit.

Already in use in some locations is where there’s no shelter, and hence no where to hang the dot matrix countdown displays — are electronic ink boards. These slot into the space on the bus pole usually used to show the bus timetable, but are a screen that replicates the countdown information. 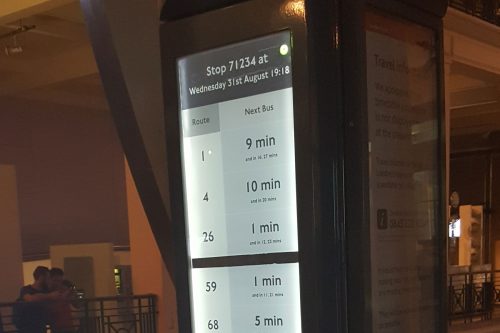 A lot of ideas are being thought about, some of them very speculative, and as is often the case, many will fail the practicality test, but as TfL has long known, sometimes the strangest of ideas is the one that really captures the public imagination.

Just look at Harry Beck’s tube map for the perfect example of how a strange idea takes off in popularity, and shortly, it’s successor will be appearing on buses as well.