Imagine a steam train without a locomotive — one where there is seemingly no form of propulsion save the telltale hint of a wisp of steam from the roof.

Such was the GWR steam rail motors — essentially light steam engines built into the passenger carriage, and used for a short while as a way of offering cheaper more frequent services along lower-traffic railway lines. 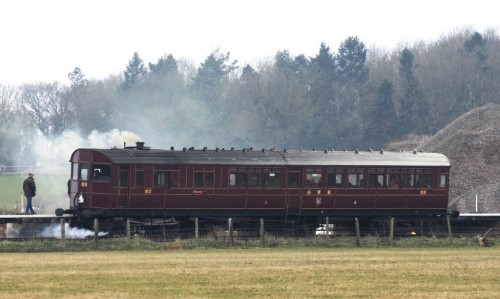 We shouldn’t overlook just what a remarkable train it was — to ride along the tracks without a dedicated locomotive pulling it. Even the electric London Underground was still using locomotives to pull carriages along, and it would be some years before they found a way of squeezing the engine underneath the carriages as is common-place today.

One working model of this remarkable experiment survives, and in October you can take a trip on this most unusual of steam trains as the Great Western Society has permission to run it along the Southall to Brentford branch line.

That’s a double treat, as that is a freight line that rarely sees passenger traffic, so a chance to ride in a 100 year old carriage along a railway line that hardly ever sees human traffic.

The service will run over the weekend of 18th-19th October, and there will be seven trips on each day.

Passengers will only be allowed onto the Brentford Branch bay platform at Southall station for the train their ticket entitles them to. An area beside the line to the south will be available for people to take photographs.

The event is supported by First Great Western, who will be making an announcement shortly about other events taking place in the area.

If the first weekend becomes fully booked, there is a contingency to repeat the exercise on 1 and 2 November.