There you are, a quiet little tube station slumbering quietly on the corner of a road, little used save for tube staff on training or the occasional disturbance by people wearing interesting clothing and saying luvvie a lot – then all of a sudden, a load of large signs are lined up around your walls, a few video screens start playing something and a couple of scale models of other tube stations appear.

The side doors open and suddenly the general public are back and wandering around the place.

What’s going on you wonder.

Aldwych, a tube station that was closed in 1994 due to a lack of justification for modernisation was now itself, slightly ironically being used to trumpet the glories of the ongoing modernisation programme as part of an exhibition called “Transforming the Tube“.

This is a welcome part of the resurgent desire by the tube management to explain why the weekly email of tube disruptions can often be summarised as “don’t bother trying to go out”. A clutch of bloggers were invited to a meeting at TfL just over a year ago, and while we can hardly take the credit for the idea of using a disused tube station for an exhibition – I do distinctly recall a discussion about the possibility of public exhibitions.

You may thank us later.

The exhibition is basically a lot of large boards with large font text explaining a lot of what is going on right now, and in another section of the station, an indication of just how old some of the working parts of the railway are. 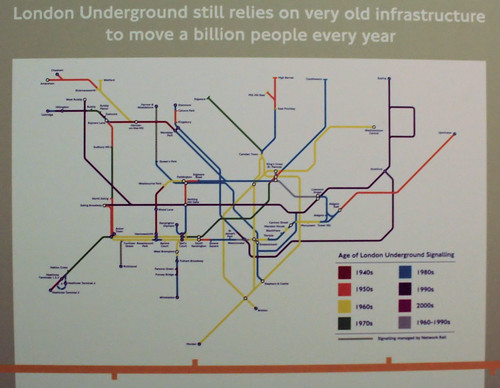 In addition to the above time-map, there was also a slightly scary display board about how some of the signalling actually works.

Yes, they really do still use a plastic sheet with holes in it to control the signalling on some lines! Your train home is being controlled by a glorified Fisher Price record player. 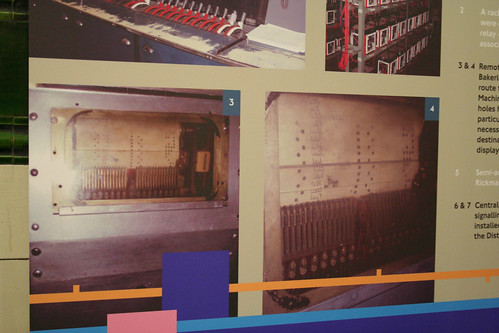 The exhibition frankly could have been set up anywhere, and indeed, I hope it does go on some sort of travelling show as it is actually quite interesting. However, the genius has to be putting it inside Aldwych tube station as that is bound to pull in even those who are only vaguely interested – just to have a look around. 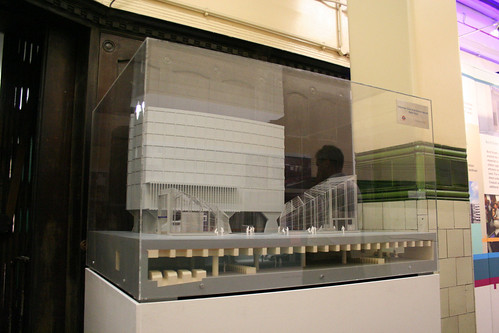 For those who go to be educated – you will learn what has been going on for the past decade during all the tube closures – and what to look forward to over the next decade. As a long suffering Jubilee Line passenger, I am looking forward to the oft-delayed completion and a one-third increase in capacity on the line.

Scanned from the free brochure handed out

Sadly you don’t get to see too much of the building, but you do get to walk through the iconic 1907 lifts that are now locked in place at the ticket hall level, and apparently sometimes the staff let you walk through the joining corridor that links two lifts in case of emergency.

However, you do get to see something quite rare, and you wont even notice how rare it is unless I explain it to you.

As you go in, via the side street entrance, there is an Entrance and an Exit – the idea being that the lifts had two doors, one letting people in, and a dedicated exit to let people out. However, the exit side was only used for a very short period of time before being abandoned and everyone used the same door.

So, as you go through the lift and into the Exit corridor to see more of the exhibition, you are now standing a very rarely seen part of the tube network. It just wont have that dank abandoned aesthetic you were hoping for.

Overall, it is a good worthy exhibition, and although 90% of the material is replicated in the take-away brochure, it is worth visiting, even if only to get to peer inside a disused tube station.

Incidentally, that brochure has a note on the back that it is printed on 100% recycled stock. In train-language, stock is the name given to the tube trains, so my brochure is made from the pulverised remnants of an old tube train?

You have until next Friday to make a visit yourself, and the opening times are:

Other people to have visited: 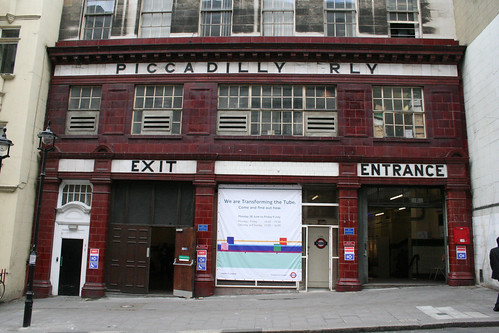