Today, London’s iconic Tower Bridge “saluted” the arrival of the replica slavery ship, The Zong which passed through for a visit to London for the next ten days.

Typically, when a ship passes through Tower Bridge, the roadways are lifted to about 60 degrees, but today – they were lifted to the full 83 degrees, which is generally reserved for special ships passing through. 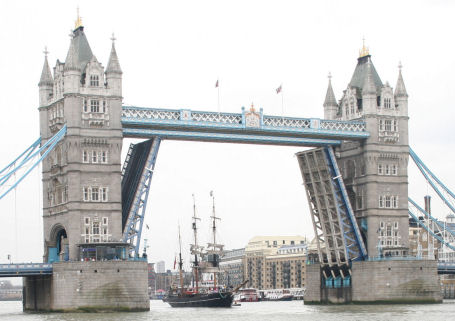 Got there about 10:30 for the expected arrival at 10:45, and there was a small crowd of fellow enthusiasts there already. As it was bitterly cold, and spitting rain, waiting was not pleasant.

Then a chap came around with some leaflets and explained that the arrival had been delayed to 12:45, due to tides. She was due to come up by tug “with the tides”, but they decided quite late to wait for the full tide so she could come up without tugs.

By then several camera crews had arrived to film the arrival.

Almost on time, the bridge did its raise â€“ and went right up to do a â€œsaluteâ€. As I said, normally the bridge raises to about 60 degrees, today it went the full 80 odd degrees, which is in itself quite rare and reserved for very special occasions.

As HMS Northumberland approached though â€“ a tug pulling large container barges approached from the other direction, and the naval vessel had to hang back. Someone is going to get a right bollocking for that!

Finally, the Northumberland came through, with sailors saluting on the sides, and a band playing on the deck.

Then two tourist boats left the local pier, and you could hear this cry of annoyance along the riverbanks as it was obvious that the bloody things would block the view. I think I got one shot of the Northumberland without any blockages.

Fortunately, they got out of the way as The Zong came through Tower Bridge afterwards â€“ and it was quite a sight with the band still playing music and quite a lot of people on the riverbank cheering her arrival.

Despite the very late arrival, and the frozen hands from the cold â€“ it was an amazing experience and I am really pleased I hung around to see this.

I have lots of photos, which need cleaning up, but for a larger version of the above photo – click here.

You can read about an exhibiton which is being held on board The Zong for the next 10 days here: