Although the art collection owned by the Monarch is often on display at the various Royal Palaces, and at the Queen’s Gallery, seeing the art owned by HM Government on our behalf is rather harder.

However, lunchtime tours of the Government Art Collection storage facility have been announced.

In a little known office in a side street, the art collection store is actually right in the centre of London, just off Tottenham Court Road. [map link]

It is here that Ministers, or their advisors, and diplomats sometimes come to see what they might like to hang on their walls. Some have strong views about what they want, while others are more open to using the art collection to show off British artists, especially in overseas embassies.

In fact, the Government Art Collection is often used as a form of soft power by governments over the years, and they will often pick pieces that show off British culture to its best for foreign visitors to admire. 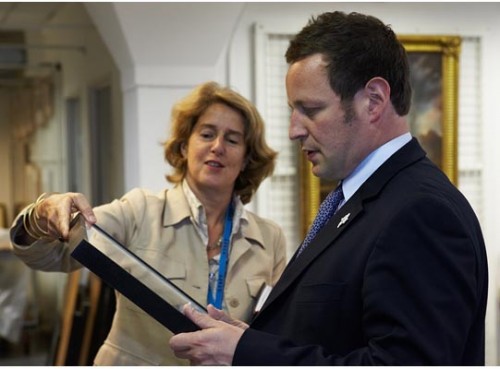 It’s an art collection that is rarely seen outside government offices, and tours, while routine, are hardly a weekly affair.

Tours are free and last between 1 –1.5 hours. The building the Government Art Collection is house in is not suitable for wheelchair users. The tours are aimed at visitors who are over 16 years old.

I’ve been before, and it really is a warehouse space, not a gallery, but probably all the more interesting for it. You might get to see some Diplomatic Bags — actually packing cases being used to ship British art around the world.

Photography was not permitted.

The next tours are on: