Today, I paid a visit to the impressive Somerset House in central London for a tour of the buildings. They hold tours on the first Saturday of each month which last about 45 minutes and are free of charge. However, even though the first tour is at 1:30pm, you are advised to arrive at 10:30 to get tickets as they run out very quickly. 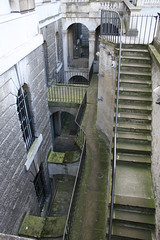 As I arrived, I spied a friend there as well so having secured our tickets, we wandered over to the Courtauld Gallery to have a visit. There is an exhibition of rare ivories there at the moment, which is due to disappear to Canada in a few weeks time – so this is a last chance to see them easily.

I was also pleasantly pleased to find that the Â£5 admission fee also included the other galleries in the building – and while most of the art on display does not really appeal to me, it was a nice wander round to find the odd bits I did like while chatting with my friend.

After that and a few other diversions, back to the information desk for our tour, which was lead by a Blue Badge guide. 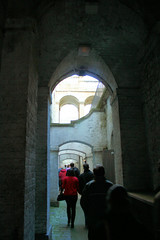 The lady went into a nice bit of history about the building, and I was surprised to learn about the problems they had building the site and some of the aspects of its past. My interest has been peaked by this and I shall try and find a good book on the subject from somewhere to learn more.

Then onto the exciting bit – and we were lead down, down and down a long flight of stairs to the lower levels, and it is now that you really start to appreciate just how far down they really are. Due to some optical illusion, looking at the base from the gaps around the main courtyard really doesn’t show the sheep depth of the structure. Going around the edges, we went to the “dead room”, which is just another arched structure, but notable for inlaid in the walls are the gravestones of Catholics from a chapel which was on the site in the time of King James 1 – hence its nickname of the dead room.

A quick detour via the former main entrance from the river – now almost obscured by the Embankment and a look at the fantastic Nelson Stairs and the tour was over.

As I mentioned above – the tours are held on the first Saturday of each month and are really worth getting up early one morning to get tickets as it is quite fascinating and you really do learn quite a bit about the place.

The Economist – article about the Ivories exhibition (ends 9th March)

Detailed history and some interesting pictures at Wikipedia