If you were wandering through a churchyard in Woolwich, you might spy a rather aloof, snobbish even, memorial stuck in a somewhat overlooked corner behind another building.

This noble lion with its nose in the air is the memorial to Thomas Cribb. You might suspect that old Tom must have been either rich or famous to have such a memorial, and indeed he was. 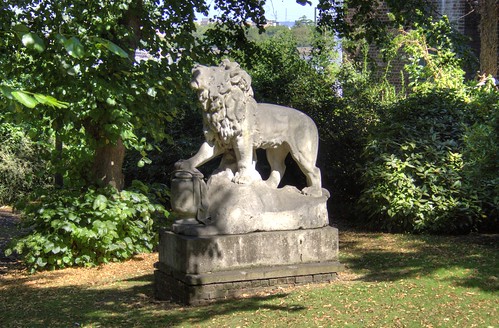 Tom Cribb was an English bare-knuckle boxer in the 19th century, so successful that he went on to become world champion.

He was born in Bristol, but then moved to Wapping as a coal porter and soon started boxing. In 1812, aged 31, he retired to become a coal merchant, and later a pub landlord – and there is still a pub on the same location.

In 1839 he retired to Woolwich, where he died in 1848, aged 67. He was buried in the churchyard of St Mary’s and St Andrew’s, Woolwich (map link) where this monument to his memory was erected.

And that monument is still standing there, lions paw resting faithfully on the memorial urn for the past 160 years. Sadly, the area is rather run down now, and the background of air-conditioning units would have offended the original sponsors of the memorial.

Hopefully, the building, a former cinema and now an evangelical church will be a temporary insult to this noble beast and it will continue to remember the memory of this rags to riches pugilist long after the ugly modernity behind has crumbled to dust. 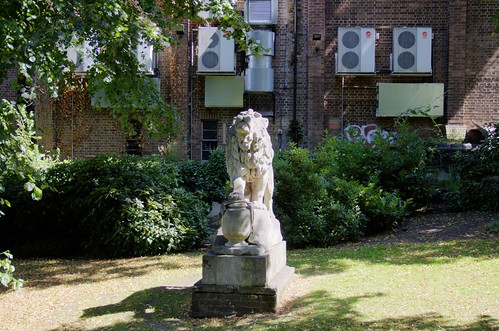 His death was announced in several papers, including this rather fine obituary in The Era newspaper.

In the good old days of the Ring, when milling had attained the zenith of its popularity, and when men contended for the renown of champions with all that noble ambition which serves to exalt the deeds of our heroes so greatly, there was connected with the Ring, a man, who by his bravery and science, soon gained the admiration of his patrons. This was the justly celebrated Tom Cribb; who, after a long illness, expired at his son’s residence, Woolwich, at seven o’clock on Thursday morning.

This renowned champion, who in himself embodied all that is sought for in a man or admired in the hardy gladiator, was born at Gloucester shire, on the 8th of July , 1781; consequently, he had nearly attained the 67th year of his age. In his last moments, he was resigned and tranquil; and he drew his last breath in the presence of those friends that were dear to him. Few men, connected with the now degraded Ring, has been more universally respected; and it may well be said that now has gone of the last of the “Romans”.

His mortal remains will be borne to their last resting place on Wednesday next, followed by Tom Spring, Jem Burn and many more of those who were once his boon companions.