Today will be the very last time you will be able to see one of the venerable old 1967 Stock tube trains running along the Victoria line in normal passenger service.

They are being phased out by the newer 2009 Stock, which comes with a host of goodies to help increase capacity on the line and do other nice things not possible nearly 50 years ago.

Some of us took a commemorative trip on a 67 Stock a few weeks ago as it made a trip around other lines, and as one of the 67s was handed over to the Transport Museum, it is not impossible that in a decade or so, the 67s will be back on the Victoria Line, as a heritage trip.

I doubt I be able to wave farewell to the last of the 67s to run along the line – as ironically, I am at the Underground’s archive centre this afternoon researching, but according to London Reconnections, the timetable for the last train is: 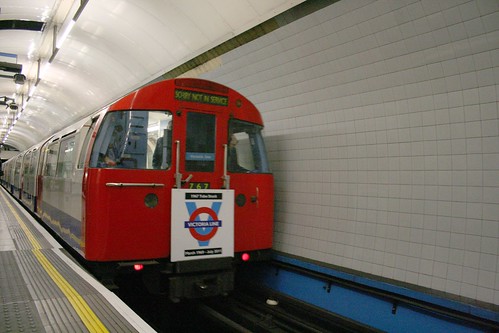 The old trains are being phased out quicker than originally planned, as TfL is really keen to switch on the new trains regenerative braking as it will help lower the temperature in the tunnels.

Currently, when the trains slowdown using brakes, as you can probably imagine, they use brake pads like most vehicles, which get hot, and release heat into the tunnels. With regenerative braking, they don’t use brake pads, but “in effect”, the spinning axle becomes part of an electric turbine to generate electricity, and that in turn exerts torque in the opposite direction and slows the wheels down.

In a purely technical definition, regenerative braking is anything that is used to slow a moving item without applying brakes, and in a way, the London Underground has had regenerative braking almost since it was first built, as tunnels are designed to slope upwards towards stations and drop way as they leave – so they use gravity to slow the trains as they approach the station.

A small effect, but across the entire network, it adds up.

Also, here are my previous articles about the “cooling the tube” project.