Today marks the 40th anniversary of the rededication of John Rennie’s 1831 London Bridge – in Arizona.

As I am sure you should know, The City of London sold the old Victorian London Bridge in 1967 to the American, Robert McCulloch who wanted it as a tourist attraction for the new town he was building at Lake Havasu.

Contrary to popular myth, he never expected to end up with Tower Bridge, and was well aware of the difference between the two bridges. 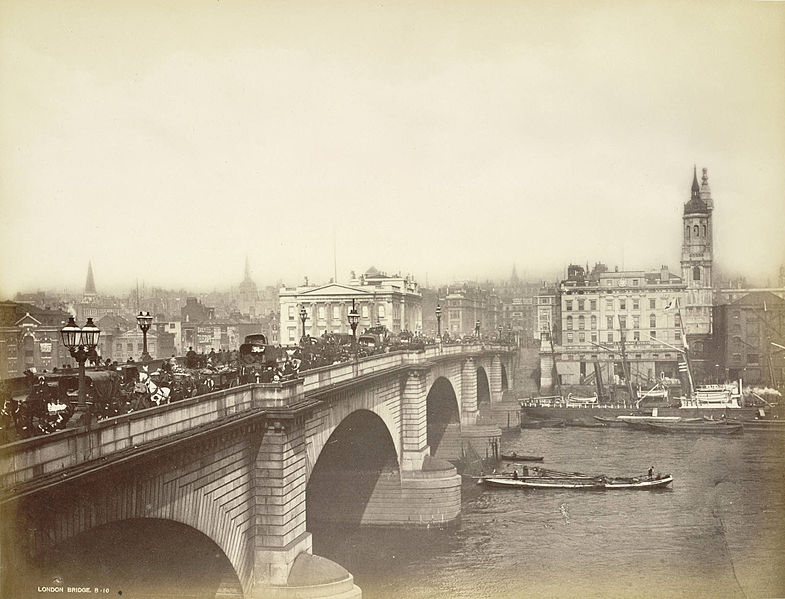 The bridge was dismantled in 1968, and stored in Merrivale Quarry, Devon for a short time before being sent to the USA by cargo ship. Once in Arizona it was rebuilt again, on solid land, and then the current water channel dredged out from underneath it.

40 years ago today — on the 10th October 1971 — the bridge was opened again to the public in a huge rededication ceremony.

The locals are planning to hold a 40th birthday party, although not until Friday.

The funds from the sale of the bridge – some US$2 million — went to the Bridge House Estates, a nearly 1,000 year old trust fund that pays for the maintenance (and rebuilding) of the river bridges within the City of London at no cost to the tax payer.

The Bridges are indeed, all within the City of London – as the City boundaries include a tiny bit of land on the South Bank of the Thames where their bridges arrive.

While the old bridge is now firmly planted in the USA, bits of it remain in the UK.

A long way from London, in Sweltor Quarry also lie some remnants of London Bridge. When the Bridge was widened in 1902–04 from 52 to 65 feet, new stone was cut for it, and for some reason, not all of the stone was used. The remaining pieces lie in the quarry to this very day.

When the really old, old London Bridge was demolished, bit of that bridge were also sold off, and some of them can still be seen dotted around London.