Today marks the 120th Anniversary of the Northern Line

Technically, today (18th Dec) marks the 120th anniversary of the first passenger journeys on what was at the time known as the City and South London Railway, but is today better known as the Northern Line.

Not only the first multi-station deep level tube train service in the world, but also the first to use electric locomotives.

Initially, the line ran from Stockwell, past (but not to) London Bridge then under the river to King William Street. The railway was opened officially by Edward, Prince of Wales (later Edward VII) on 4 November 1890 – but not to the general public until the 18th December.

So today marks its 120th anniversary.

The railway was extended in 1900, with a station finally at London Bridge, and the closure of King William Street and its replacement with Bank thanks to a new tunnel between Borough and Bank stations.

The abandoned tunnel that originally ran between Borough and King William Street still exists, and was used during WW2 as deep level air raid shelters. In the 1960s, the tunnels acted as ventilation for London Bridge station, then was cut in half by the later Jubilee Line extension. The tunnels were also plugged with concrete either side of the river, just in case of flooding.

On the north side of the Thames, King William Street station is quite famous as it was on a steep slope, and the early electric locomotives struggled at times to get up the slope. The remains of that station also exist though – apparently accessible via a manhole cover. 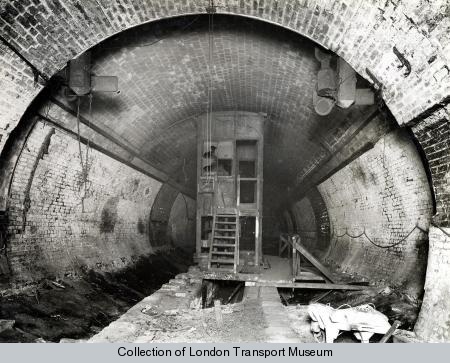 Between 1922 and 1924, the then quite narrow tunnels were widened to the width we are accustomed to today. Later in 1933, the line was nationalised.

While technically, the original design can be considered to have been flawed, with expansions and closures all over the place, it did demonstrate that a deep level train network was possible at a time when only sub-surface steam railways were available.

The first attempts at anything new usually have problems, so we shouldn’t be to critical of their mistakes.

However, one thing that should be thought about is the silence.

Steam trains were what people were used to – and they are dirty and noisy at the best of times. The streets of London were incredibly noisy, with horses clattering and iron shod wheels rolling over pebbled roads.

Suddenly, here was this nearly silent train that magically glides into stations without any apparent form of mechanical engine then swiftly slides down the tunnels to the next station.

To the Victorians, it would have been truly a wondrous sight.