Today is the 90th Anniversary of the British Death Ray

Today marks the 90th anniversary of a remarkable moment in military history, as a fully functioning Death Ray was tested by the UK’s military.

The problem was that no one really knew how it worked, and the inventor wasn’t all that keen on explaining either. Yet, somehow it did seem to work. Sometimes.

So, did the UK really have a Death Ray of some sort back in the 1920s? 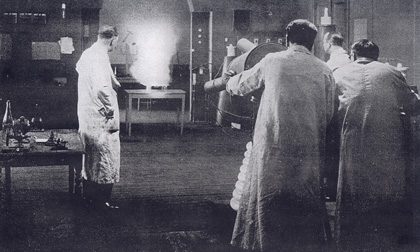 The inventor of the device was a noted, if somewhat eccentric chap called Harry Grindell-Matthews who had some successes with radio controlled devices and remote operation at a distances.

However, every time serious investors, or government officials wanted to study his radio devices he would refuse to show them the workings. This is a bit odd, but it comes only a couple of decades after Marconi had secured a patent on a box containing radio components that were not novel or innovative, simply by refusing to let anyone study them closely until the patent was granted.

So, in 1923, Harry Grindell-Matthews claimed to have developed a device that could stop a motorbike from a distance, explode gunpowder, and even shoot aircraft out of the sky.

He made a few demonstrations to journalists, but when the War Office contacted him, he refused to show them how the device worked, just demanded payment for the “black box” unseen. When the War Office understandably demurred, Matthews suddenly announced that the French were interested. 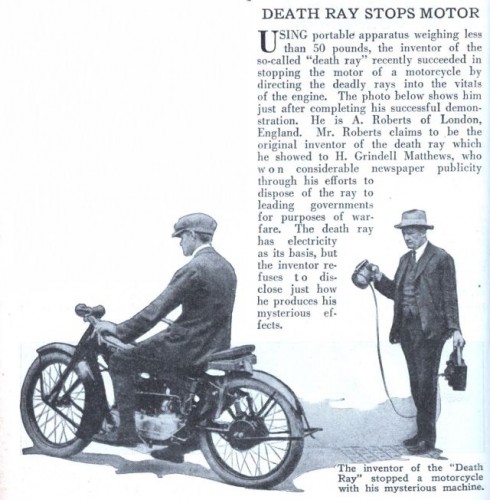 Which brings us to the 26th April 1924, when he finally demonstrated his Death Ray of officials at the Air Ministry, where it is claimed he was able to stop a car in its tracks, although some reports that be barely made a light bulb glow a little.

Skeptical, they asked for a repeat demonstration, but Matthews refused to give it, and a court order was secured forbidding him selling his invention to foreigners.

A demonstration was made for Pathe News, but frankly it shows nothing at all.

The Air Ministry was still somewhat curious about the Death Ray, and probably slightly to respond to media pressure, offered him £1,000 if he would demonstrate it again under conditions they felt more suitable to use in a military setting.

He refused, and also refused other offers, including a £5,000 offer to demonstrate the Death Ray in America. He left for the USA though, and was not really heard of until 1930, when he reappeared in London.

Then on Christmas Eve 1930, Londoners were shocked to see a beam of light in the clouds that turned into a angel with outstretched wings gliding across the sky.

Traffic stopped. People stared. Then the angel vanished, and a message read Happy Christmas. Matthews was back, and as publicity hungry as ever.

However, the media had moved on by now, and wasn’t that interested in this eccentric man and his toys. 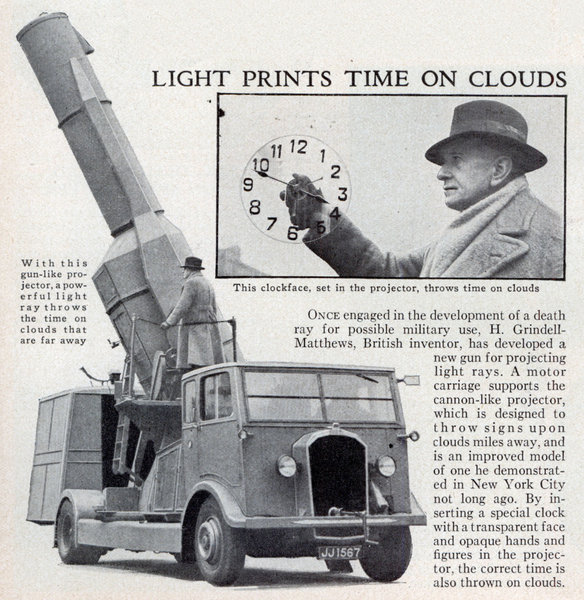 He moved to South Wales were it was said he continued to work on his Death Ray, until his death on the 11th September 1941. His other inventions were still of suitable significance as to merit him a short obituary in The Times, although they mentioned the Death Ray simply in passing, and concentrated on his other achievements.

In 2009, his home was recognised with a blue plaque.

He had certainly invented something, and that something did seem to have some sort of effect, on occasions. However no one really knows for sure what effect it was that he probably stumbled upon by accident when tinkering around with magnets and the like one day.

Maybe he did actually invent a Death Ray. We will never be sure.