Today marks what is possibly the 800th anniversary of the Great Fire of Southwark – which burst forth around the 10th July 1212.

The date is difficult to pin down exactly, with reports varying from the 10th to the 12th July 2012, or worse. According to an assistant (whose name I forgot, sorry!) at Southwark Cathedral, the most likely date according to Lambeth Palace was the 11th July – which was the feast day of St Benedict.

However, it may have been the day before as the old switch-over of dates was sundown not midnight as today, so the fire might have started on the evening of the 10th, or during the day of the 11th.

Anyway regardless of when it took place, the fire destroyed St Mary Overie (“over the river”), now Southwark Cathedral and spread to the recently constructed London Bridge. High winds flamed the fire and cinders were blown across the river into the City of London and started fires there.

Although London Bridge was now constructed of stone, the wooden buildings famously built on top caught fire as well – and allegedly trapped a crowd who had rushed from the City to help its stricken southerner.

Depending on the report, as many as 3,000 people were killed on London Bridge, or drowned when they leapt into the river – but that is a contested report. What is not in dispute is that the Bridge was ruined and only partially usable for several years afterwards and lack of access to the City would have worsened the income for farmers on the south side of the river.

Quite what caused the fire is a mystery that has been lost to time, but it seems to have started somewhere near the Bishop of Winchester’s palace.

Although the Norman era St Mary Overie was destroyed by the fire, a new building was built on the site – which in 1905 was upgraded to a Cathedral.

Work rebuilding the choir and retro-choir began around 1215 and the eastern portion was ready for the consecration of a bishop in 1260. By 1273 the choir, sanctuary, aisles, retro-choir, lower tower and western bays of the nave had been completed. Although damaged by several fires in its later history, and largely restored in the 19th century, the core of the church layout is still 13th century.

The only surviving relic of the fire is said to be a stone in the rebuilt Church which shows signs of scorch marks from the fire. Whether this is genuine, or a later affectation to lure in medieval tourists is unknown, but here is the famous lump of stone – with amusingly, a fire extinguisher next to it. 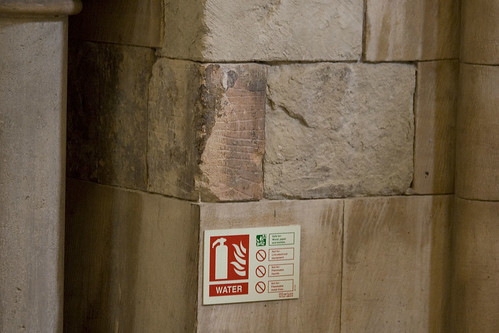 To mark the 800th anniversary, there will be a service this evening at Southwark Cathedral at 5:30pm and which will be followed by fireworks in the courtyard outside at 7:30pm.