Timelapse film of the works at London Bridge station

For the past couple of weeks, Southern and Thameslink trains haven’t been able to call at London Bridge station as rebuilding works take place — and a timelapse video of what was going on during the blockade has been released.

New track and power supplies have been installed while signal engineers have been commissioning a new signalling system to incorporate the two new platforms and the re-modelled approaches to the station.

Some Thameslink Programme work at other sites on the network has already been completed, allowing some services to resume. This included new signalling installed on the New Cross Gate to Sydenham corridor and also in South London near Bermondsey allowing resumption of planned Southern and London Overground passenger services. Work to replace tracks at the entrance to the Hornsey Depot in North London was also completed. 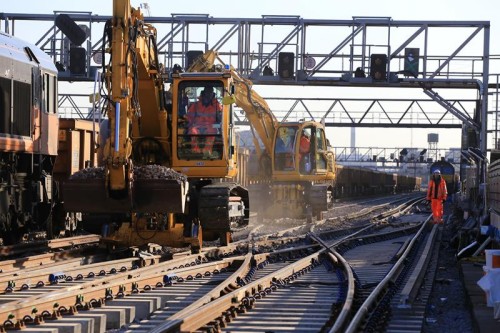 Southern or Thameslink services will resume, with a revised timetable for 2015, on January 5.

There will be further changes on January 12, when platforms 4, 5 and 6 are taken out of use for rebuilding and we begin a 20-month period where Southeastern’s Charing Cross trains run through the station without stopping.

The new concourse at London Bridge will be bigger than the pitch at Wembley, increasing passenger capacity by 65%

London Bridge will be longer than the Shard is tall

Up to 24 trains per hour will run in each direction, during the peak, between St Pancras and Blackfriars

Up to 18 Thameslink trains an hour will run in each direction, during the peak, between London Bridge and St Pancras – currently there are none between 7.30 and 9am