A chance to ride in a steam train along parts of the London Underground network go on sale later this morning. 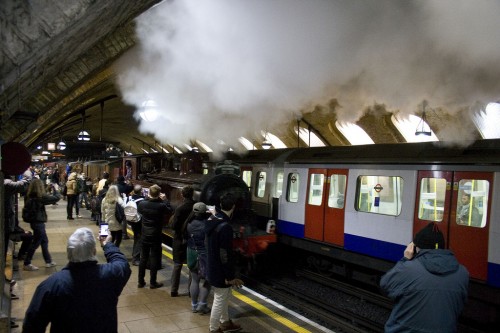 Firstly – celebrate the 150th anniversary of the Hammersmith and City line with a steam train trip along part of the original Underground railway. Trips will run over two weekends — Sat 2nd and Sat 9th August.

Metropolitan Locomotive No. 1, Metropolitan Milk Van, the Chesham Set, the 1920s Sarah Siddons electric locomotive and the recently restored Jubilee Coach 353 will make up the train.

Actors and a brass band will entertain passengers at Moorgate Station following the steam runs through some of London Underground’s tunnels.

The first run (8:24am) will go between Northfields on the Picadilly Line via Earl’s Court to Moorgate (steam hauled).

Tickets for both dates are now on sale via this website.

The second chance for steam trips is over the weekend of 16th-17th August.

The first run will go between Wembley Park and Rickmansworth (steam hauled).

The last run will go from Rickmansworth to Chesham and return to Harrow-on-the-Hill (steam hauled out, electric back).

Tickets for both dates are now on sale via this website.