Last year, I wrote that London Underground were planning to run a steam train along the underground network as part of its 150th anniversary.

Turns out I was right about the plans, if not entirely correct about the route. Well, I did write about it when plans were practically embryonic.

The plans having been finalised now are for a limited number of trips between Moorgate and Paddington, to recreate the original opening day of the Underground – with the turn around being at a number of stations beyond that.

So the recreation journey is slightly longer than the original, probably taking into account the lack of facilities on the Underground now for turning around steam trains.

Tickets to be on these heritage trains are going to be as hot as the coals in the locomotive engine, so a ballot is being held.

To whet your appetite, the steam train ran a practice trip along the line earlier this year, as this video clip by Leon Daniels shows.

Applications start tomorrow morning (Mon 29th Oct) at 10am and close in two weeks time. No need to rush on Monday morning, you have two weeks to apply. Then the lucky tickets will be drawn and tickets dispatched in December for a pre-Christmas treat.

The train itself will be made up of a number of heritage carriages carrying 250 passengers, with the steam locomotive at one end, and the electric locomotive Sarah Siddons at the other end.

A maximum of 2 tickets per person can be requested and only 1 request per person. It will be possible to select the date and either first or standard class seats.

It will not however be possible to select specific seats or train departure times – that causes a problem, as even in the cheaper 3rd class, you could be looking a ticket costing £50, or £150. There’s no way to say “I can pay £50, but not £150”. It also means you could end up in a trip hauled by the electric locomotive and not the steam engine.

Part of me is keen to be on the train, even if the price is going to make my wallet scream in agony – but the rest wants to be on the platforms with a good view as the trains pass by as steam trains do look a lot better from the outside frankly.

I suspect that access to the platforms will be controlled (balloted?) – otherwise they will be dangerously overcrowded.

As mentioned, the ballot opens on Monday. Good luck if you are entering! 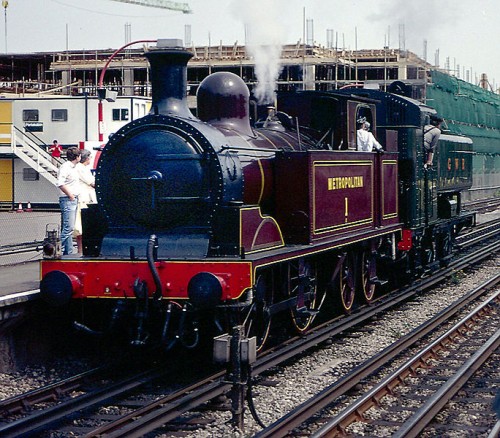 There will also be a number of other heritage trips on other parts of the network above ground later in the year.

Photography tip – in the absence of friendly properties overlooking the railway lines, I might suggest a ladder and Porchester Terrace as a possible spot for overhead photos on the very last trip. Will research some other locations closer to the date.