During summer 2018, a major exhibition, will be staged in Westminster Hall. Featuring a range of interactive features, the exhibition will cover the campaign for votes for women and the representation of women in the House of Commons and the House of Lords.

Throughout the exhibition, rare and previously unseen historic objects, pictures and archives from the Parliamentary collections and elsewhere will be on show.

The exhibition will also give visitors the experience of women’s place in Parliament by recreating lost historical spaces of the Palace of Westminster.

200 years ago, this loft space above the House of Commons Chamber was where women watched and listened to Parliamentary debates. Women were banned from the public galleries. Those who were politically engaged and wanted to watch discussions of issues they were campaigning for, such as the abolition of the slave trade, would make their way to this space to watch and listen. 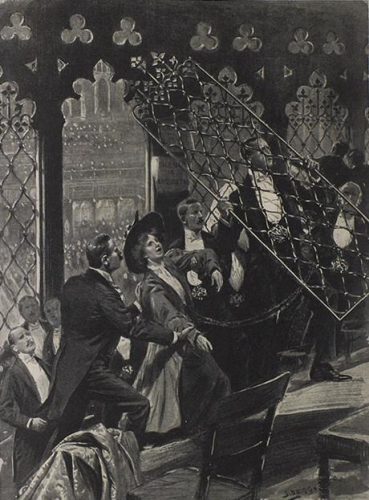 After the 1834 fire which destroyed the old Palace of Westminster, the new House of Commons included a Ladies’ Gallery which allowed women to view the Chamber from high up above the Speaker’s Chair. The gallery was closed off by brass grilles, deliberately placed there to stop MPs seeing the women. The grilles restricted women’s view and the Ladies’ Gallery was hot, stuffy and soon nicknamed “The Cage”.

From 1918, women could stand for Parliament for the first time. An office called the Lady Members’ Room was provided but it was poorly furnished and became increasingly overcrowded as more women were elected as MPs. They had to share the space, which became known as “The Tomb” despite their differing politics. Once the few desks provided were all taken, women MPs had to sit on the floor to do their paperwork and hold meetings in corridors.

The final part of the exhibition will be the Chamber, exploring the experience and work of women MPs and members of the House of Lords today. Women have now occupied the highest positions in Parliament, including Betty Boothroyd, the first, and only (so far) woman Speaker and Baroness Hayman, the first Lord Speaker in the House of Lords.

This free exhibition is open Monday to Saturday between 27 June and 6 October 2018 (closed 27 August).

Capacity is limited so advance booking is essential. Tickets can be booked online, by calling 020 7219 4114 or in person from the Ticket Office at the front of Portcullis House.

Exhibition tickets, which provide access to Westminster Hall only, will be released in batches every month on the following dates: