It’s outside London, but close enough, and there is a chance to go inside a Victorian era jail, and come out again.

HM Prison Reading, formerly known as Reading Gaol, was built in 1844 and despite its totally out of date Victorian design, it only closed as a prison three years ago. 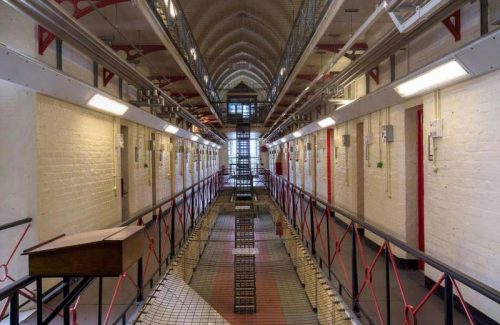 It was originally designed to carry out what was the very latest penal technique of the time, known as the separate system. As a county gaol, its forecourt served as the site for public executions, the last one taking place in 1913.

It was used to hold Irish prisoners involved in the 1916 Easter Rising, for internment in both World Wars, as a Borstal and for a variety of other purposes.  It was also the residence of Oscar Wilde following his conviction.

Although originally slated to be torn down following its closure, there have been calls to preserve it, which have seemingly failed, but for a few weeks, it has been given over to an arts group for public tours.

Public tours take place on Friday and Saturday afternoons during Sept and Oct.

To book a ticket, go here, but be warned, their website (built by Capita) is almost a case study in how NOT to build a ticketing website. It’s a bit of a pain to use, and breaks almost every website usability rule I studied when building website checkout software.

Maybe the website builder should be locked in the jail as a warning to others.

Tip, if you time your visit for the weekend of 9th/10th Sept, then Heritage Open Days are taking place as well, and you can see the other venues in Reading here.