As part of the Bloomsbury Festival, there’s a chance to take in a behind the scenes tour of the grand hotel that dominates the area, the Principal London. 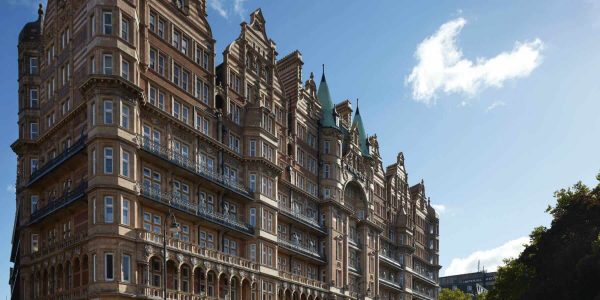 The Principal London is a Grade II* listed landmark building in Bloomsbury that was originally built in 1898 to designs by Charles Fitzroy Doll for the Frederick Hotels Company. Partly in response to the success of the Hotel Russell, Doll received what would become his most famous commission: the RMS Titanic. The ship’s grand dining room was based on the hotel’s restaurant.

The exterior of the hotel was and remains, clad in thé-au-lait (tea with milk) terracotta, with the coats of arms of the world’s countries as they existed in 1898 placed between the spandrels of the first floor and four British Queens guarding the entrance.

The hotel design was very well received in articles of the day, and it went on to have a great influence on the future appearance of the square’s other properties – when their leases came up for review, they were extensively renovated with terracotta to bring one consistent style to the square.

Of late, following an £85 million restoration and refurbishment, a new lease of life has been breathed into the building. The hotel is currently in a “soft-opening” phase following the refurbishment.

Tours are available on Sat & Sun 20th-21st October, are free and can be booked here.