There will be a religious election on Thursday

Published 2 May 2015 by By Ian Mansfield Churches

While secular law prevails and causes millions to ascribe a pencil cross on a slip of paper this coming Thursday, another election will also take place, of a religious variety.

The below notice is on the board at St Mary-le-Bow church in the City of London, which apart from being a church is also a legal court. And although based in London, The Court of Arches is actually the provincial court for Canterbury, and this week, there will be a sitting to confirm the election of each new diocesan bishop in the province.

Which leads to the use of wonderfully archaic language of the sort that frankly, I love.

Whereas The Episcopal See of St Edmundsbury and Ipswich having become vacant by the resignation of the Right Reverend Father in God William Nigel Stock the College of Canons of the Cathedral Church of St James and St Edmund, Bury St Edmunds after having petitioned for and obtained the Royal Licence for an Election to be held for a new Bishop did assemble and elect The Reverend Canon Martin Alan Seeley to be the Bishop and Pastor of their Cathedral Church 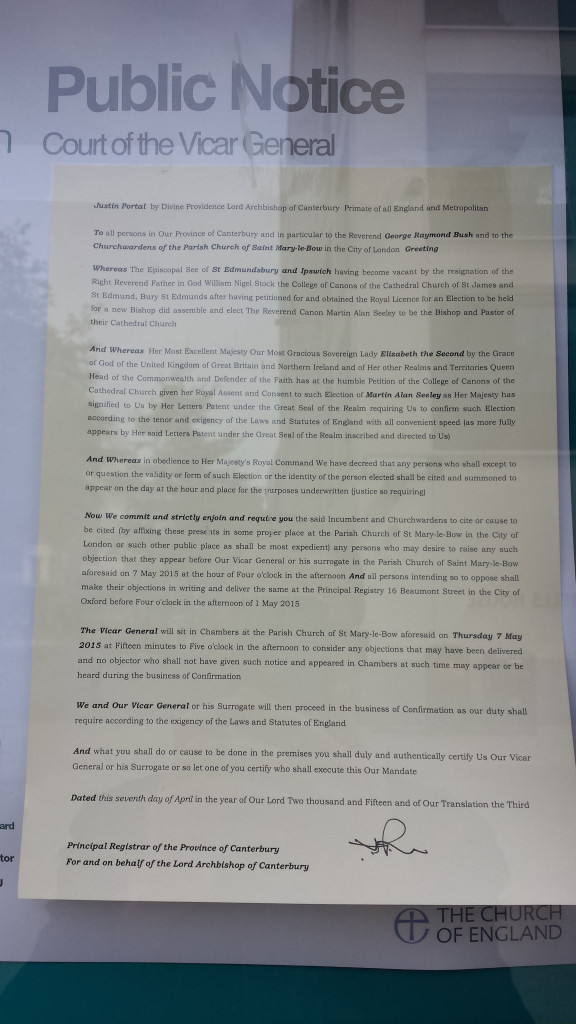 NEWSLETTER
Tagged with: church of england