If you have passed by the Southbank recently or crossed over Waterloo Bridge in a red bus, you might have struggled to avoid seeing a big red shed and the four huge chimneys that have appeared next to the National Theatre. 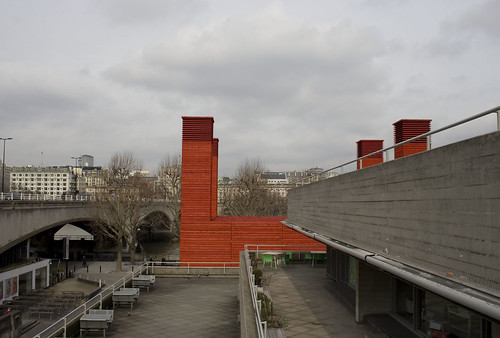 The “Big Red Shed” as I, and I am sure, most people will call it — but officially The Shed — is the outcome of a situation caused by the closure of one of the National Theatre’s existing spaces for refurbishment.

They needed a replacement – but only for a short period of time. So they got a shed. A very big shed. Not the sort of thing you can pick up from Ikea though. For a start, its meatballs aren’t infused with horsemeat. That said, one of the plays this summer will involve the puppeteers from War Horse, so maybe it has inherited some Ikea influences after all.

The location, right in front of the building was also about the only location that the Big Red Shed could go, and it turned out to be a fortuitously convenient place after all as they were able to convert an existing terrace space into the new foyer for visitors.

Designed by the same firm handling the revamping of the main theatre complex, Haworth Tompkins, the Shed was not explicitly commissioned but evolved from discussions about what could go where, when and how.

Its most striking aspect, the red paint, was actually one of the last things that were decided upon, and chosen to create a contrast with the grey concrete of the building behind.

The other aspect that you will notice is that it is entirely clad in wooden planks. Not chosen randomly — they are an exact match to the wooden planks once used to form the concrete walls of the National Theatre. Not only in concept, but the red planks are the same width and length as their concrete opposite numbers. 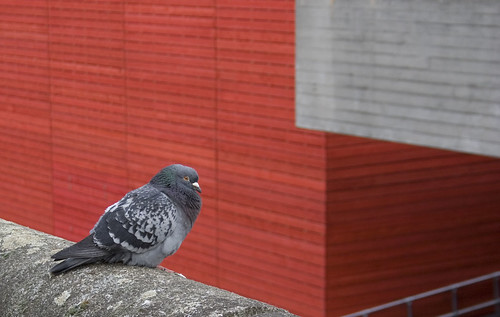 The structure also looks as if it sits firmly on the ground, but the theatre within is raised up by half a meter or so, leaving a hidden void beneath. Curiously, the void beneath is what then defined the four striking chimneys. These are ventilation chimneys, and they draw air up through the theatre, which enters via that void space beneath the building.

As a result, they have designed a ventilation system that works without any mechanical moving parts whatsoever.

It is bound to be compared with Battersea Power Station though. Let’s face it, that is unavoidable. 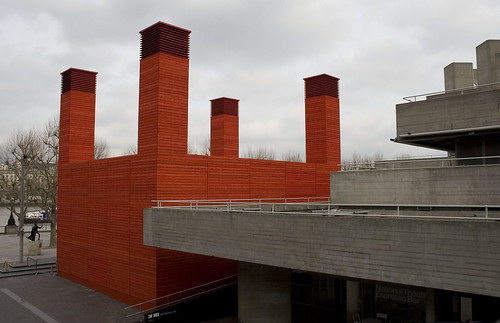 Within is an austere theatre space that will either appeal or not depending on your theatrical preferences. The aim of the venue is to be more experimental than the National is used to presenting, and offer shorter runs to more plays. 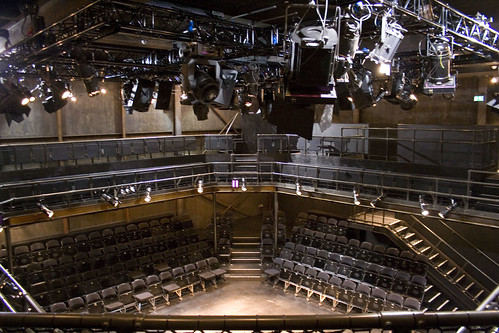 The theatre opens next month and will be in situ until next February. After that, it will be torn down and most of the materials recycled.

Personally, I quite like the building, with one caveat.

The National Theatre complex has been criticized for having just one main entrance and being a bit of a fortress on the remaining three sides. While the revamping work is designed to open up the building, here we have a temporary building that is as fortress-like on three sides as its concrete predecessor. 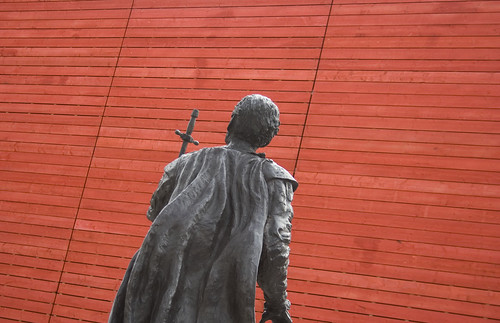 Laurence Oliver outside The Shed