The year without a summer

The year of 1816 was marked by the total absence of a summer in most of the northern hemisphere. Cool temperatures and heavy rains resulted in failed harvests in Britain and Ireland. Families in Wales traveled long distances as refugees, begging for food, the cost of which rose sharply. 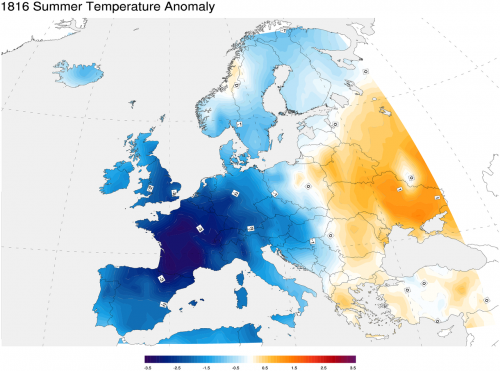 With the cause of the problems unknown, people demonstrated in front of grain markets and bakeries, and later riots, arson, and looting took place in many European cities. It was the worst famine of 19th-century Europe.

At the time the cause was unknown, but today, it is understood to have been a near perfect storm of solar and terrestrial effects.

The earth was already probably slightly cooler due a natural variation in solar activity known as the Dalton Minimum. In the run up to the year without a summer, there had been a number of large volcanic eruptions, which had causes dust to reflect some of the solar energy to be reflected back into space.

Then, in April 1815, Indonesia’s Mount Tambora blew its top off — sending a colossal amount of dust and sulphur into the atmosphere. Over the following year, it’s been estimated that one eruption lowered global temperatures by around 1 °C.

The cooler weather also disrupted the jet stream, sending torrents of rain over Europe, and deep snow across the east coast of the USA.

This final straw in the climate was enough to send Europe into famine.

Reports in the papers of the time talk about poor weather conditions and as the harvest approached, of poor yields, leading to initially low prices for farmers, but higher prices in the cities as food supplies started to run down. 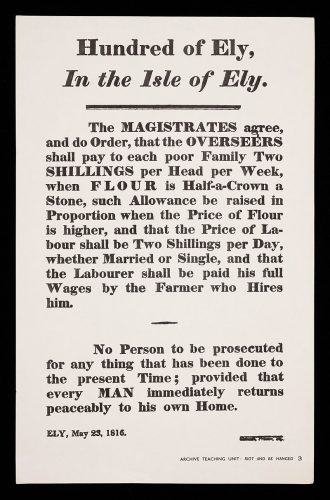 High taxes and the rising cost of food meant riots broke out in Norfolk, Suffolk and Devon during the year, with gangs flying flags calling for “Bread or Blood”. Although the threat of force was often used to quell the riots, authorities were also forced to offer guarantees on the cost of grain, and amnesties to some of the rioters. However, the Littleport riots of May 1816 saw five men hanged for their actions.

Another sign of how dire the situation had become towards the end of the year is in a letter to The Times which called for the distilleries to be shut-down so that more grain could be released for eating by the poor.

The scientist, Luke Howard, who is often called “the father of meteorology” wrote in The Climate of London that much of mainland Europe was affected by flooding that destroyed crops and a lack of warmth that caused fruits to rot.

The effects of the year without a summer were to linger for several more years, as countries struggled to rebuild their shattered agriculture, keeping consumer prices high well into 1820. The UK was well served by its shipping trade and was able to import food, but many parts of mainland Europe suffered grievously.

The years of famine also saw the first wide-scale adoption by governments of poor relief in a sense that we might recognise today — with for example the British government passing the Poor Employment Act offering low cost loans to businesses that would hire unemployed labourers, and other countries trying to control the cost of food.

For artists, the suffering had an upside, many of Turner’s celebrated paintings of landscapes were made at this time, when the sunsets were especially dramatic as the setting sun passed through the unusually dusty atmosphere.

What was described as the “incessant rainfall” sent Mary Shelly and friends while staying in Switzerland to stay indoors and tell stories — and the birth of Frankenstein and later, Dracula.

A literary horror born out of a literal one that the people had lived through — the year without a summer.

Ely and Littleport riots of 1816

The Climate of London by Luke Howard

The Year Without Summer by William K. Klingaman