The Wellington Testimonial Clock-Tower in Southwark

In 1854, the good peoples of Southwark wished to demonstrate their appreciation towards the Duke of Wellington, who had died only a few years earlier, and chose to construct some form of memorial to him.

As detailed below, an original idea for an equestrian statue was cancelled in favour of a “clock tower”, which would not only be decorative, but also serve a useful function.

Although the clock tower was indeed built and put in Southwark, just a few years later, in 1867 it was taken down and moved to, of all places – Swanage in Dorset.

It seems that the site of the Clock-Tower on the approach to London Bridge, which was already busy when it was erected, was a poor one. The enlargement of London Bridge train station in 1864-67 must have made its location even more of a nuisance, and it was taken down, while the “rubble” was given to a builder who needed ballast for his empty boats returning to the mines of Dorset. He then chose to rebuild it  on his estate in Swanage.

Based on the comments in the article, it seems that the Clock-Tower would have been sited on the southern approach to London Bridge, by what was the recently renamed Wellington Street, being a short length of today’s Borough High Street between the Bridge and Duke St Hill. 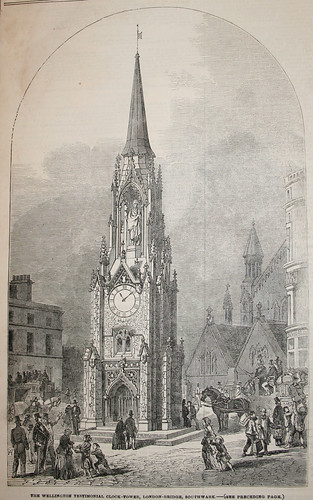 This picturesque design will, when completed, accomplish a twofold purpose – the commemoration of the public services of England’s greatest hero, and of the peaceful triumphs of the Great Industrial Exhibition Of 1851.

Several years since it was proposed to erect upon this spot near the south end of London-bridge, an equestrian statue of the great Duke of Wellington. The memorial was executed, but its location was changed to the area of the New Royal Exchange; and from circumstances connected with the choice of the sculptor of this statue, Chantrey, arose the colossal equestrian group, by M. C. Wyatt, at Hyde-park corner. It may be added that the first stone of the Clock-tower was laid on the 29th ult, by the originator of the Wellington statue, Mr T. B. Simpson, Treasurer to the Commissioners for Lighting the West Division of Southwark. The utility of the Tower in this overcrowded thoroughfare will be much enhanced by the Clock, which has been generously presented by Mr. Bennett, of Blackheath, by whom it was contributed to the Great Exhibition. The funds have been partly raised from private sources; but the railway companies, the termini of whose lines adjoin the site, the Corporation of London, and certain public companies, have been liberal contributors.

The Tower has been designed by Mr. Arthur Ashpitel, F.S A.; it is of the Perpendicular, or best period of Gothic architecture, and in general character resembles the memorial crosses, which formerly grouped with many a gabled street of England; as will the Southwark Tower with the finely restored Lady-chapel, and choir end and tower of the priory church of St. Mary Overie; and, in our mind’s eye, it harmonises with the gabled house-fronts of Southwark, some five-and-forty years since.

The proceedings on the 29th ult. were opened with an impressive prayer by the Rev. Mr. Curling. The stone was then laid by Mr. Simpson, with the usual formalities; after which, those gentlemen who had assisted at the ceremonial partook of an excellent dinner at the Bridge-House Hotel, at which Mr. Simpson presided. The Chairman, in the course of the evening, stated the circumstances which led to the erection of the Tower—the desire to perpetuate, in this testimonial, the great public services of the Duke of Wellington; and to reader the memorial otherwise useful, by furnishing it with an illuminated Clock. Mr. Bennett took occasion to declare that the Clock which they had accepted was constructed with every improvement, and that he his undertaken to keep his gift in repair and complete working order during his lifetime. Mr. James Edmeston, in replying to the toast of Mr. Ashpitel, the architect (who was absent on the Continent from ill health), assured the company that the design was strictly in conformity with Mr. Ashpitel’s drawings, and that the canopy had received his final correction before being placed in the builder’s hands.

The contract has been taken by Messrs. Rowland and Evans; and the total cost, including lamps and railing (omitted in the accompanying View), will be within £700. The Clock will have four transparent dials. The precise spot was predetermined, by a pier already prepared beneath, the dry arches of London-bridge; and the position was also governed by the necessity of allowing one of the clock-faces to be seen from Wellington street, which makes a considerable angle with the Bridge

The funds already in band will not allow of the immediate erection of the statue of the Duke of Wellington, as shown in the design; but the requisite sum will, doubtless, be raised, so as to complete this very useful and interesting public memorial.