The Victorian swimming baths floating in the Thames

In around the early 1870s, a floating bath was erected next to Charing Cross.

According to Old and New London, the baths would contain many thousand gallons of filtered water, drawn from the Thames. Experiments were made which, according to the book, established “beyond all doubt that the Thames water can be easily and effectually filtered”.

“When filtered it is found to contain a very large proportion of sea-water; in fact, we have heard it said that at high tide it is almost entirely sea-water, clear and green, as at Ramsgate or Margate. But this statement we are inclined to question.”

And question it should have been, considering that even today you probably wouldn’t want to swim in the Thames. 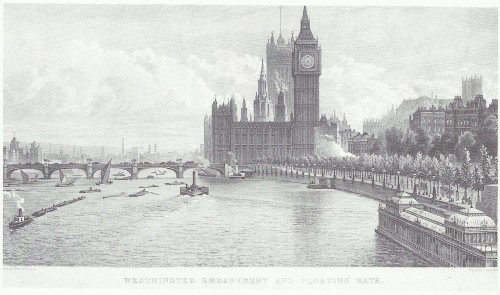 The baths themselves were essentially a “ship”, constructed in 1874 by the Thames Iron and Shipbuilding Company based at Canning Town. According to the Illustrated London News of May 1874, it was 180 feet long, and some 31 feet wide, with the bath inside being 135 feet long and 25 feet wide.

Just over a year later, it opened to the public, without any of the pomp and ceremony so common to ventures of the time, and was said to to be the first of a series of such baths to be moored along the river bank of the Thames.

Admittance to the baths was priced at one shilling.

The filtration system, which reportedly caused some difficulties to perfect was a series of small tanks where water would sit still for a while to allow solids to drop down to the bottom of the tank. There, the top layers were forced through bags made of a strong jute like fibre and filled with rough gravel and sand.

According to The Telegraph when the baths opened, this filtration system could still deliver 500 gallons of water per minute to the baths.

The bath did not last long though.

In 1885, the presumably by now closed down baths were bought by the South Eastern Railway, for scrap.

Just two years later, a letter in the Pall Mall Gazette of July 1887 bemoaned the lack of swimming baths on the Thames, as they have in Paris.

I speculate, but it was probably the railways that killed off the baths, as they made it possible for even working class people to travel to the coast for a day, and swim in waters far more bracing and cleansing than anything the Thames could offer.

Nearly 150 years after the baths were first opened, there is yet another attempt to build a public bath on the Thames. Will it last any longer than the original?