Unbuilt London: The Victorian proposal for a railway to Westminster Abbey

Fairly recently, a chap called Moffat wrote a story about an underground railway in Westminster — to the considerable fury of tube geeks who spent an inordinate time chewing over holes in the plot.

However, in 1846, another chap called Moffat was also thinking about railways in Westminster, and produced this grand scheme.

The Proposed Railway Street Through Westminster 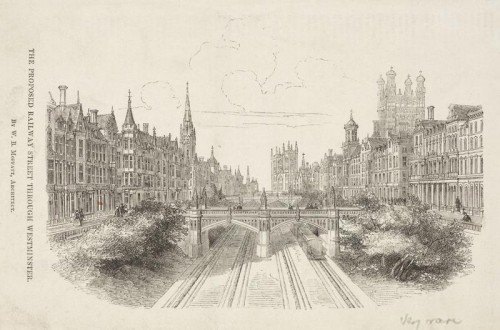 Not quite an underground railway, although I suspect that considering the value of land in the area today, it would have been built over by now.

I have however been unable to find out anything else about this proposed railway. Where did it go, who was planning it, who was paying for it.

I suspect that it might be just one of those drawings put out occasionally by architects to drum up publicity for their practice or tempt potential investors into a project.

A very close look suggests that it would have run right in front of Westminster Abbey, which is probably why it didn’t get much further than a drawing. There was a railway planned to run into Westminster — the Westminster Terminus Railway — but that terminated a couple of streets away, so this can’t be a drawing for that.

Indeed it would also be odd for W B Moffatt to be engaged in building a railway as from what little is known about him, he had little, if any experience in such matters.

He was in fact a builder’s son who had collaborated for about a decade with the considerably more famous George Gilbert Scott in his early career. During that time they mainly worked on workhouses for the poor and a few churches.

Later Moffatt went on to build a few churches of his own, or refurbished others.

Nonetheless, it’s an interesting picture, so I leave it here as a curiosity.