Published 10 July 2010 by By Ian Mansfield Events and Tours

In the early 19th century, the graveyards in central London were becoming not just rather full, but also a bit of a health hazard – so in the 1830s laws were passed that banned the burial of new bodies with The City of London area.

This necessitated the building of new cemeteries outside London, and this lead to the creation of London’s Magnificent Seven:

Of these, only Kensal Green and West Norwood had catacombs of any scale, although a smaller version can be found in Brompton Cemetery.  The famous “catacombs” of Highgate Cemetary are actually above ground.

Thanks to a visit arranged by Subterranea Britannica, I found myself with a fairly rare chance to go into the catacombs in West Norwood, with the tour carried out by a member of the Friends of the Cemetery.

Laid out with a central corridor and four side corridors off each side, the underground structure is roughly square in shape. In the very centre of the main corridor is a hydraulic lift that would lower coffins from the chapel above to the vaults down below. 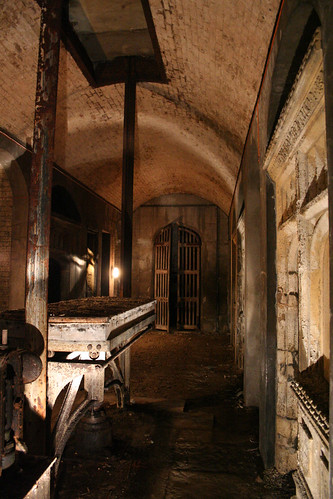 At the end of each side corridor is an air vent and along the corridors are “rooms” mostly with stone shelving on which the coffins are placed. Each person or family would pay for a space on the shelving, and if you were particularly rich, you might buy an entire shelf and have your own doors placed on front, or buy a whole “room” for yourself. 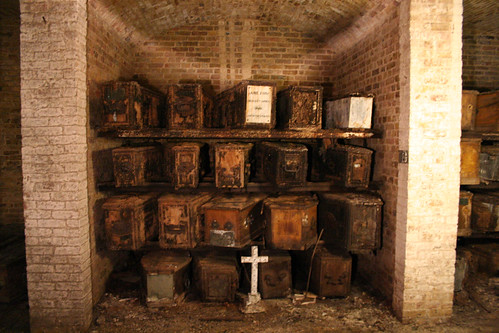 There was a staircase that leads down from the Chapel above – although that is now sealed off – largely as the Chapel was badly damaged by German bombs, and was cleared away. 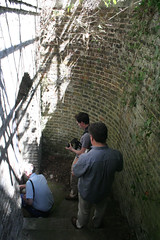 The area above the catacombs is now rather unsightly as it is covered in scaffolding to stop rain from getting down to the undercroft area.

Our tour, therefore, took us in via the back-door, which has to be approached through quite thick undergrowth and then down a staircase to the locked door. On a hot sunny day, the cool air wafting out like a Victorian miasma was a delightful blessing.

Inside and the rotting remains of the hydraulic lift dominates the main hall. At the time of its installation, it was an engineering marvel, and an earlier designed screw-based lift in Kensal Green was later replaced with a similar hydraulic lift.

The Kensal Green model has been recently restored, but here in South London, we were left to ponder the rusting remnants of a bygone age. 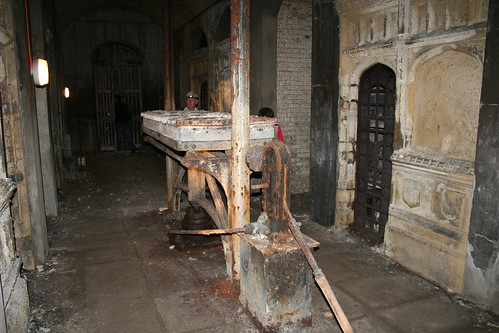 After that, it was a case of wandering around with torch in hand (there is limited lighting in there now) to peer at anything and everything – taking copious photos along the way. 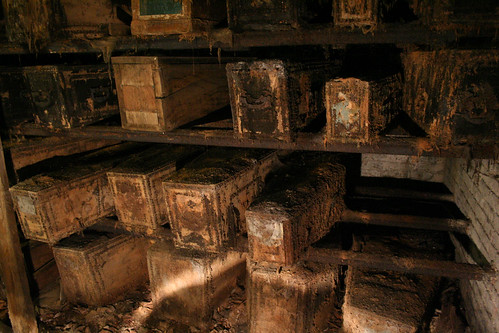 There are an estimated 2,500 coffins in the catacombs, although the site can easily hold a lot more than that. 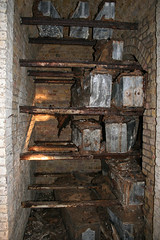 Coffins that are not buried in the ground are required by law to be lead lined, so as you go around, you can find coffins in various states of decay, but that applies only to the wood surround and its velvet decorations. The lead core is untouched by decay.

The floor would originally have been lain with flagstones, but it is now largely rubble thanks to a rather unsympathetic Lambeth Council who forced the original owners to sell to them in 1965, then until about 1997 pretty much vandalised the place.

When the council compulsorily purchased  the cemetery, it was with the agreement that all existing burials would be left untouched, but the council decided to start clearing the land and illegally reselling the plots. It’s estimated that about a thousand people are now buried in someone else’s plot.

In addition, quite a few listed monuments were flattened, although some have been recovered. The removal of war graves was a more serious matter, although the War Graves Commission satisfied itself with just repairing the damage.

Eventually, legal action forced them to stop, and there currently  seems to be a bit of a truce between the Friends and the Council over how to manage the site.

Getting back above ground, the cemetery is notable for having a fairly decent selection of burials from famous  Victorian industrialists.

The cemetery is open for guided tours once a month – but that is above ground only. Once a year, they open the catacombs to tours on their open day, but that won’t be until next year now, or you can organise a special tour as I went on.

However, on the 1st and 3rd Sunday of each month, Kensal Green holds tours that include access to its catacombs, although photography is not permitted in their vaults as they still accept internments there.

To add to the list though – next weekend is the annual open day at Brompton Cemetery, and they will also include short tours of their smaller catacombs. Not sure about photography though.

3 Pings/Trackbacks for "The Victorian Catacombs of South London"