The underground crypt in the City of London

Lurking in a tiny side alley on  a small side street near Fleet Street in the City of London lies one of the city’s less well known bits of heritage – the remains of the Whitefriar’s Crypt.

To find the crypt, head down the suitably named Whitefriars Street until you get to Magpie Alley and then head down that to get to Ashen Tree Court (google map). In here you will notice a sunken basement, and steps down to the lower level, where you can see the remains of the Crypt along with a display board explaining some of its history. 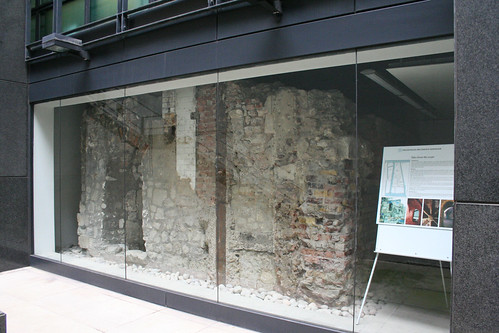 Sadly, you can’t go inside the crypt, but the glass walls give an idea of what is there, and at least it is on display and not hidden away in locked-off basements.

A bit of history:

The area – bounded by Fleet Street to the north, Whitefriars Street to the east, Temple Avenue to the west, and the Thames to the south – was the site of the former Carmelite Friary. The Friary was founded in 1247 and the first church on the site was built around 1253. This was replaced by an enlarged church in the mid-14th century. The friary was dissolved by King Henry VIII in 1538 and the frater, library and kitchen were given to the King’s Armourer.

The name Whitefriars incidentally, commemorates the white habit worn by the Carmelite Friars.

Following the dissolution, the later inhabitants of the area claimed in 1580 to be exempt from the jurisdiction of the City and to enjoy the same liberty as the friars before them had. They also obtained further privileges from James I in 1608, which is also around the time that Michael Drayton and Thomas Woodford converted the former refectory for use as a theatre.

Liberties, being exempt from the stern rule of the City of London tended to attract actors and other rebellious sorts – much as Southwark was also a site for the arts and actors who wanted to be close to the City wealth, but outside its control.

During 1608, the acting company Children of the King’s Revels were based there and were succeeded by the Children of the Queen’s Revels in 1609. They remained at the theatre until 1614 and in that same year, merged with the adult company, Lady Elizabeth’s Men, before moving to the Hope theatre. The Whitefriars Theatre closed in 1629. 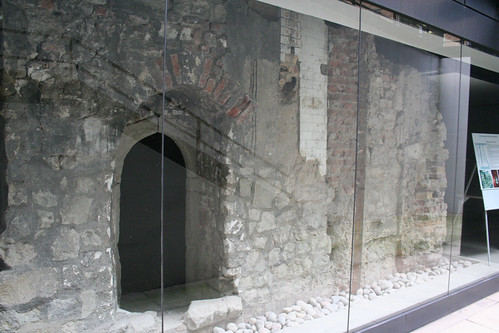 After the closure, the area was slowly redeveloped into a maze of squalid housing and workhouse, earning the area an ugly reputation.

The crypt though was re-discovered in 1896 in Britton’s Court where it was used as a cellar to one of the houses in the Court. A similar crypt adjoined it on the north, but is thought to have been destroyed about twenty years previously. 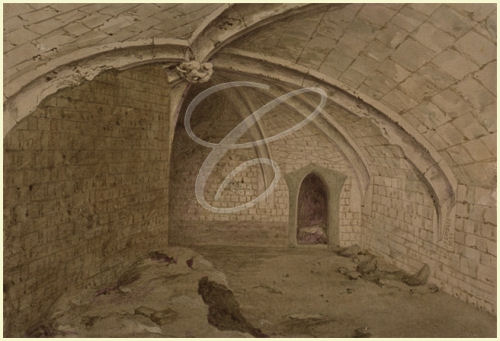 The area was redeveloped in the 1920s when the News of the World needed a larger combined office and print works. When all the News International offices moved out of Fleet Street to Wapping in the 1980s, the area was again redeveloped, and it was now that the Crypt got its rudest awakening.

The crypt was in the wrong place for the builders, so it was surrounded with a steel raft and carefully moved across the road – still preserved, but now in a totally different location.

So there it is today, in the basement of a modern office block, just across the road from its ancestral home.