The Twelve Monsters of Christmas

Christmas isn’t just about a coca-cola marketing gimmick, it has a long and often dark history. Even the kindly St Nick wasn’t always the genial character we think of today.

As good needs its evil, here are 12 of the monsters that terrorised the Yule season.

On the first day of Christmas, my nightmares sent to me…. 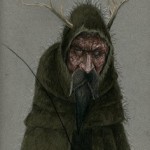 A German legend usually seen as a crotchety, fur-clad Christmas gift-bringer figure often seen dressed more like a vagrant or beggar. Although German in origin, the character also appears in parts of Canada.

Traditionally he visits homes on Christmas Eve, and children have to perform a song for him. He then throws some sweets on the floor as reward, but will beat them with a stick if they grasp the sweets too quickly. 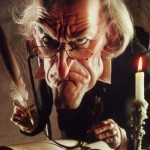 Charles Dickens’s anti-hero has become a staple part of the Christmas tales, especially in modern times.

Although redeemed in the end, it is the opening of the story that has stuck with people the most, as his Bah Humbug has become synonymous with a grumpy character of mean spirit.

Think hard, can you think of a single thing he said on Christmas morning? Nope, neither can I. But Bah Humbug. That’s legendary.

Then again, Christmas was a different time then as well — how many of us can go out (or send someone out) to buy a Turkey on Christmas morning these days? 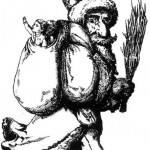 A pure counterpart to Father Christmas, Père Fouettard — the Whipping Father — accompanies St Nicholas on his rounds on the 6th December.

While St Nick hands out presents to good children, Père Fouettard whips the naughty children, hence his name as the whipping father.

He often appears as a man with a sinister face and dressed in dark clothes with long hair and a long beard. Sometimes he is seen carrying a basket to carry away the naughty children. 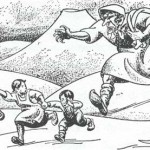 A giantess who lives in the mountains of Iceland who has been terrifying the people since the 13th century, although using her legend to scare children was criminalized in 1746.

Although not directly a Christmas figure, she was associated with the Yule Lads in the 17th century as her favourite meal is a stew of naughty children who she collects around Christmas time. 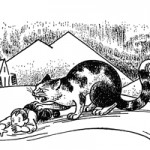 A giant cat lurks in the Icelandic countryside and will eat people who aren’t given new clothes for Christmas. This seems like a good way of getting rid of people you don’t like – just don’t buy them any clothes.

Farmers used to use the threat of the Yule Cat as an incentive to workers to finish processing the autumn wool otherwise they’ll be eaten! 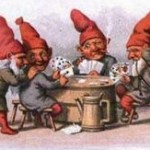 Another Icelandic legend, the Yule Lads are thought to number 13 and are seen as trolls who visit Children during Yule and will leave either gifts for the good, or rotting potatoes for the naughty.

Their depiction varies from kindly dwarfs to monsters that eat children, although these days more often depicted as men closer to the American Father Christmas than as ugly characters. 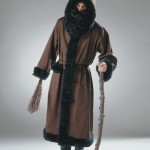 A companion to Father Christmas, often seen dressed in a brown robe he is a fairly recent character being a mere 300 years old.

Traditionally he quizzed children to see if they can pray, and if not, he beats them with his sack of chimney ashes.

He is also said to leave a stick on St Nicholas Day for parents to beat their children with the next morning. 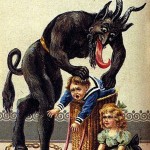 Krampus is a sort of pied-piper anti-figure from the Alpine countries who carries away naughty children in a sack.

He traditionally visits homes on the 5th December in the form of a hairy goat-like man figure with a huge tongue sticking out. He often carries birch branches to beat the naughty children with. 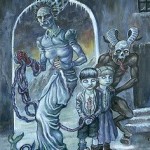 A former South Germanic goddess who was originally known as the Bright One, who appeared as a white-robed female spirit.

Later demonized by the Church, she is seen as a bird footed creature that roams the countryside in winter and would attack naughty children at Christmas by slitting open their stomachs, removing their stomach and replacing it with straw and pebbles. 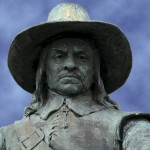 Although he didn’t personally sign the order, Oliver Cromwell is often blamed for an act that has gone down in infamy — the time that Christmas was banned in England.

Under the puritans, revelry and parties were frowned up and the clamp-down reached its peak when Christmas was banned, and local enforcers were ordered to ensure that shops were open and celebrations did not take place.

Following the restoration of the Monarchy, Christmas was also restored. 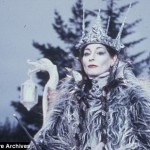 A fictitious character (unlike the others!) who appears in the CS Lewis novel’s The Magician’s Nephew and The Lion, the Witch and the Wardrobe.

In the latter, she causes it to always be winter and never Christmas in Narnia.

It’s a curious ability, as it seems to suggest that Christmas is not just a date in the calendar but an actual force of nature that can be held back by the witch. 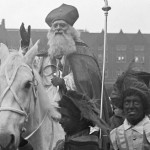 Black Pete is a traditional companion to St Nicholas from Europe’s low countries who has become increasingly controversial in recent years due to his appearance.

Often seen as a black-up face, while the origins are not racist, there are seen as such now, and appearances in popular culture are being frowned upon.

He is sometimes showed as being a chained devil, but Black Pete adopted the darker aspects of St Nicholas and would punish naughty children with a beating or a lump of coal instead of a present.

Merry Christmas — don’t let the demons carry you away.