The tube train that travels through time and space

A couple of decades ago, there was a children’s TV show which is often considered to be a precursor of the Crystal Maze in that it featured a few people trying to solve a series of puzzles. 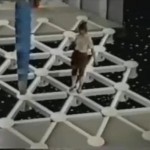 The celebrities would travel across time and space to the Planet Arg, inhabited by shape shifting dragons who would normally adopt human shapes, apart from one who generally preferred to disguise himself as an aspidistra plant.

Do you remember The Adventure Game?

Although it only ran for four series, it seems to have been something that people of a certain age remember with considerable fondness, especially the finale with the vortex maze.

Apart from the show itself, my main memory was of how the humans travelled to Arg, which was by London Underground tube train that travelled across time and space, pausing at a signpost and then heading on to Arg. 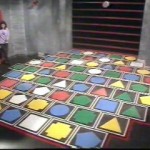 Surprisingly difficult to find any corroborating evidence for this, and it would seem that the tube train might have been used for just one series before switching to a different introduction trailer.

A bit of hunting, and I finally found a trailer – obviously nicked and uploaded to YouTube – but still enjoyable.

Jump ahead to 2:15 in the video if you want to get to the tube train trip.

Isn’t it about time BBC2 devoted an evening to The Adventure Game?