The Tower of London wants you to name a raven

Published 4 May 2021 by Miscellaneous

Two new ravens have been born at the Tower of London, and there’s a chance for the public to chose a name for one of them.

They were born in March this year to the Tower’s resident breeding pair, Huginn and Muninn, who take their names from the ravens of the Norse god Odin. The first of the two, a male, has been named Edgar, while the second – a female – is still in need of a name. The name is also to be chosen from a shortlist, so Raven McRavenFace will not be an option.

I am sure you will know the legend that if the ravens ever leave the Tower, then the Kingdom will fall. Unsurprisingly, the Tower keeps at least six ravens in the Tower as an insurance policy.

Obviously, it’s just a bit of silly fun. However, there’s more to the story than it seems at first glance. While most reports will say the story that keeping the ravens at the Tower dates back to the restoration of the Monarchy some 300 years ago, Matt Brown found that the earliest record of the legend dates back only as far as 1944, when the ravens that lived around the tower anyway had declined to just one, and in 1946, to none.

The ancient legend proven to be fallible is also shown to be far less ancient than thought.

But, people love a legend, and facts be damned, people will still talk about the dire consequences that could befall the Kingdom if the ravens leave the Tower.

So, make your mark in legend and help choose a name for a raven.

The name receiving the most votes will be announced as part of the Tower’s reopening on 19th May. 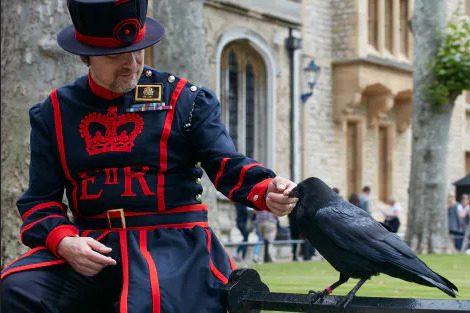