The time your Mince Pies contained mutton, veal and pepper

A 17th-century recipe for mince pies that’s recently been found in The National Archives calls for a loin of fat mutton to be minced with a leg of veal. Adding to the strangeness, the recipe is also an official government document – as it was catalogued as a State Paper, part of the accumulated papers of Edward Conway, Secretary of State from 1623 to 1628 during the reign of Charles I.

While modern day mince pies are a sweet, Christmas time treat, the cooks of the past mixed sweet and savoury ingredients. As well as meat, raisins, currants and dates plus cloves, nutmeg, sugar and lemon and orange rind were added all topped off with a seasoning of pepper.

While our modern day pies are generally about the size of a cupcake according to the recipe, 17th-century pies were all manner of different sizes – and pinned up in paper.

According to Dr Jessica Nelson, Head of Collections (Med/E/Mod/Map/Leg) at The National Archives: “The State Papers have some really weird and wonderful stuff in them, from suggestions for how to cure toothache to copies of poems by Ben Jonson and John Donne. It is a curious mix of private and professional interests.” The piece that includes the mince pie recipe, SP 14/189, also includes, for example, a copy of the statutes for Exeter cathedral, the estimate of the cost of building a war ship, a table of weights and measures of pearls, a discourse in Italian on the Inquisition, and a list of Spanish words and phrases with translations.

For anyone interested in finding out how 17th-century mince pies tasted, the original recipe text reads as follows:

1. For six Minst Pyes of an

8. For the Paist mingle 1 pound and a halfe of Suger

9. w[i]th the Flower and breake in the Yolkes of six

16. and mingled w[i]th halfe a pound of Suger, the other

17. Frute and Spyce, the Raisons must be stoned, &

18. some of them mynced amongst the meate, the

19. others put in hole, put in the Joyce of two Orringes

20. and one Leamond, and the Ryne of them smale

22. When the Pyes are filled slyce Dates and stick

23. in the top, and when you sett them into the 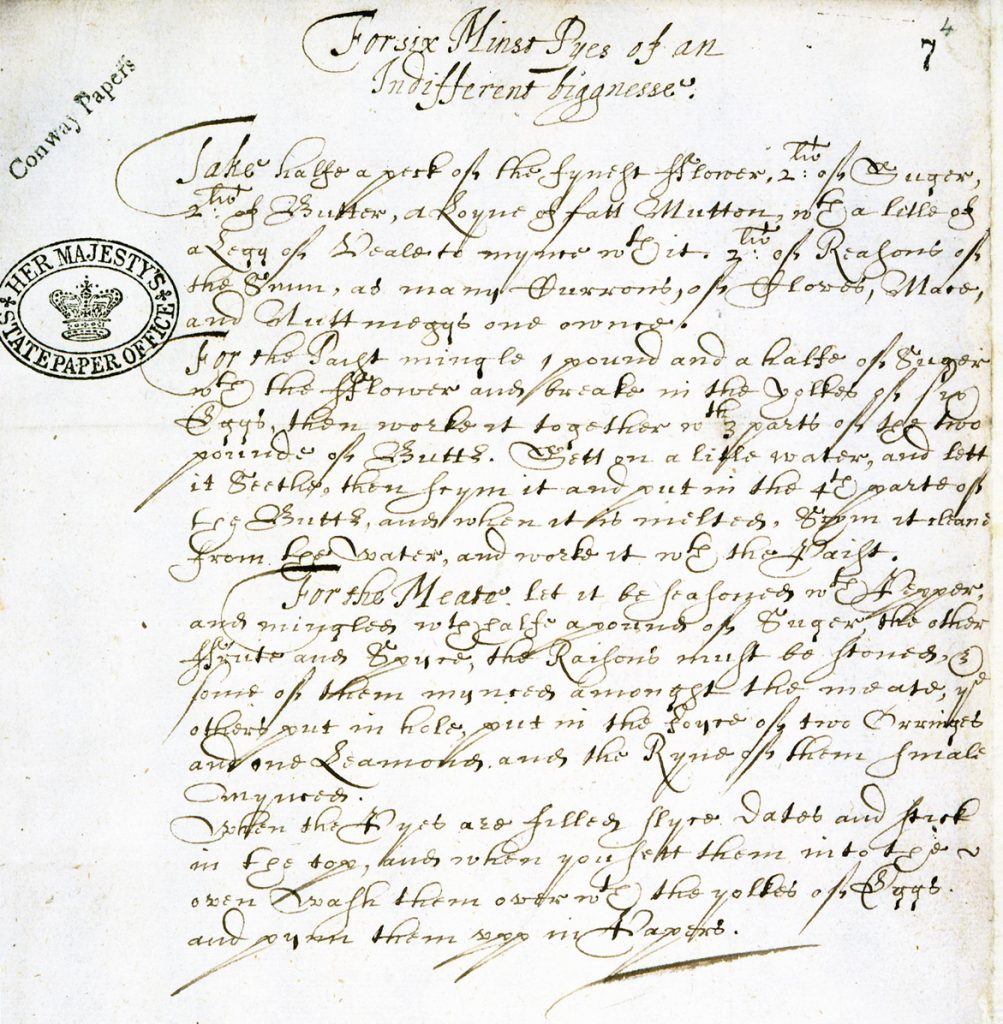